"Good morning. My name is John and we're from the funeral home."


I watched as the two men in dark suits entered the house, walked down the hall and into the back bedroom.

My grandfather had been in a coma for days.

Now he was gone from his worn out body.

Grandad had been diagnosed with lung cancer eight months ago. However, he had been sick for quite some time.

My grandfather did not want to spend his last days in a hospital, so my mother, along with a few relatives and Hospice, took care of him in his Taylor Street home.

At the time, I was in college, so I would drive an hour home and help my mother take care of him.

After the doctors started the chemotherapy treatments, my grandfather became weak and stayed in bed most of the time.

When he needed to use the restroom, I would help him to his feet, put my arms under him and walk my grandad to his bathroom.

While he stood there, I would hold him up, pull down his pajama pants, and make sure he did not urinate on the floor.

There came a point where my grandfather was too sick to get out of bed.

So I got blue hospital gloves, a plastic urinal, and helped him go to the bathroom while he was in bed.

After watching what happened to my grandad, I thought, "I don't want to end up like this."

He began to sleep more and more, waking up long enough to get a drink of water. His body was starting to shut down.

One bright summer morning, we went into his bedroom. We could see he was no longer breathing.

His eyes were closed and his mouth was open. His body was becoming rigid and cold.

I watched as the men from the funeral home removed my grandfather from his bed, place him on a stretcher, and wheeled him out the front door. 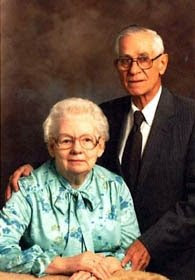 The eight month battle Tom O. Smith had with cancer was over.He was now holding hands with his beloved Mary Sellars Smith once more.

PS What about you?

Do you believe no matter what you do, you'll be sick and disabled as you get older?

Or are there things you can do to put the odds for good health in your favor?