The Differences Between Wheat Grass and Barley Grass 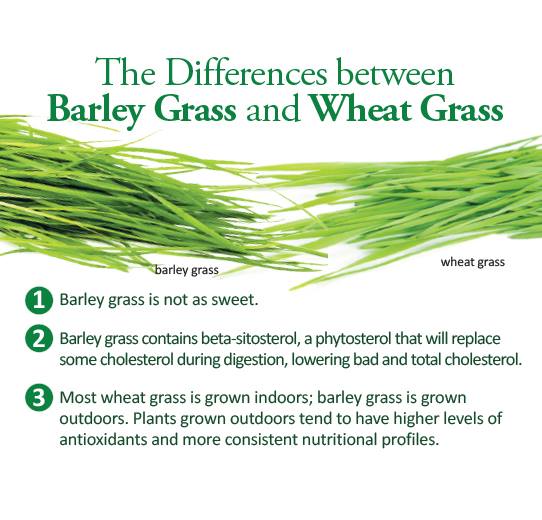 Wheat grass and barley grass have a lot in common. In fact, they are considered sister plants.
Both are classified in the grass family, Poaceae.

They have hollow stems, flat leaves and produce multiple seeds from complex flower heads. Both are cereal crops commonly cultivated for their grains, but have also gained popularity as health foods in their young grass forms.

They both provide excellent variety of vitamins and nutrients, reduce inflammation and help to maintain body alkalinity.

Since they appear to be so similar, one must wonder if they can be used interchangeably. The differences are subtle, but they do exist.
Taste

The first difference, of course, is the taste. Wheatgrass has a sweet taste, while barley is a bit more bitter. Obviously, this distinction is a matter of, well, taste.

However, if you don't care for wheat grass, barley grass confers similar benefits, while maintaining its own unique flavor.

In either case, you're still drinking grass juice.
Beta-Sitosterol

Barley grass contains beta-sitosterol, a phytosterol which has a similar structure to cholesterol found in the human body.

Beta-sitosterol will actually replace some cholesterol during digestion, which lowers bad and total cholesterol. It does not, however, raise good cholesterol.

Additional scientific research has found beta-sitosterol may provide symptom relief to those who are having trouble urinating due to an enlarged prostate (benign prostatic hyperplasia). Beta-sitosterol, though, does not, in any way, shrink the prostate.

Most wheat grass is grown indoors and hydroponically. Barley grass tends to be grown outdoors.

There are advantages to growing crops indoors. It saves water, money, time and work. But these are all advantages for the farmer, not the consumer.

Growers also have more control over their plants when they are grown indoors, which can be an advantage in the hands of a skilled botanist.
Hydroponic crops can achieve greater growth rates and yields. However, this does not necessarily increase the nutritional value of the plant.

Growing plants outdoors does affect their nutritional value. Nutrients from the soil add to the nutritional makeup of the plant.

Dietary nitrate, for example, comes from the nitrogen in the soil. Soil with poor nitrogen content yield plants with less dietary nitrate. Hydroponic farmers have to add those nutrients themselves.

Finally, and most importantly, plants grown outdoors are grown under some degree of stress. This might seem like a negative, but when plants are exposed to stress, they produce more antioxidants. Those antioxidants are sent, first and foremost, to the leaves of the plant.

In fact, a 2004 study (Czech University of Agriculture) on barley leaves specifically repeats this data. The researchers found barley plants exposed to cadmium produced significantly more antioxidants to protect themselves.

Basically, plants use the antioxidants to protect itself. When consumed, those benefits are passed on to the consumer.

Plants grown indoors are subjected to little stress and likely have fewer antioxidant properties because of it.