"Within a week of taking this probiotic from AIM, Tyrel finally found relief from the painful cramps." 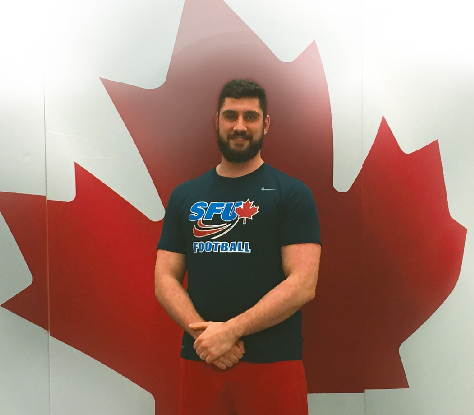 "My son, Tyrel, began having severe abdominal cramps when he was around fourteen years old.

I talked to a few parents who said it could be Crohn’s disease, but Tyrel's medical checkup showed that it wasn’t.

Being a young athlete who played basketball in high school, Tyrel sometimes had to spend an hour or more in the bathroom because of the terrible cramps.

To avoid spending so much time in the students' toilets, he would often sneak into the teacher's private washroom.

Occasionally, he got caught on the way out by a teacher who would say "You know that's for teachers only, right?"

Tyrel would answer, "I know."

But because of his good rapport with the teachers, they all knew that he must have had a good reason for not following the rule.

Fortunately, Flora­Food was recom­mended to me by a friend, Alison Douglas.

Within a week of taking this probiotic from AIM, Tyrel finally found relief from the painful cramps. It made such a positive difference in my son's life!

Tyrel's twenty-two now, so he's been using FloraFood for around eight years. He is studying at Simon Fraser University, where he recently became an alumnus of the SFU football team.

During his football years as a defensive lineman, Tyrel would have no abdominal cramping as long as he consistently took FloraFood.

But every once in a while, he couldn't be bothered and stopped taking it. His symptoms returned after a week, and then he would start complaining about the cramps.

I would have to ask him, "Are you taking your FloraFood?"

He wasn’t of course.

And he couldn’t afford an attack before a football game because he wouldn’t be able to play. As soon as he went back on FloraFood, Tyrel was back in the game!

These days, Tyrel is taking a variety of AIM supplements, including AIMega, Just Carrots and BarleyLife Xtra (because he likes the sweet taste) to boost his nutritional intake.

And he won’t be without his FloraFood!" - Brenda Ratich, Canada


Testimonials should not be construed as representing results everybody can achieve. FloraFood® and other AIM products are not intended to diagnose, cure or prevent any disease. Results may vary per person.