The doctor said, "As far as I'm concerned, you are healed." 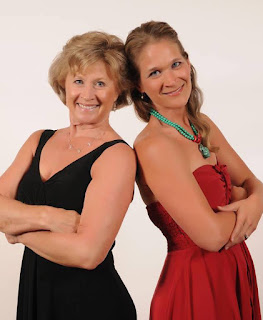 "I grew up on a farm and helped my father to grow many vegetables, namely green beans. We plowed, planted, fertilized and weeded, helping each seed grow to its fullest potential.

By caring for plants and nurturing them to maturity, I would learn that our bodies must be carefully nurtured in much the same way to maintain health and wellness.

My passion for health and an interest in the human body led me to become a physical and health educator and coach. My husband, Mike, and I raised three children, Tim, Heidi and Bryan, all of whom were high-level athletes.

It was around Christmas of 1991, while on a family vacation, that the health of our daughter, Heidi, took a terrible turn for the worse. Her neck started to swell. Within hours, she had a lump the size of a tangerine. We immediately took her to the emergency room.

A few days later, we received the diagnosis that Heidi had Hodgkin's disease - cancer of the lymphatic system - and a sizeable tumor near her thyroid.

It was devastating and unbelievable. Heidi was a sophomore and academically at the top of her class at Oregon State University. She was also an amazing dancer and a strong gymnast with the determination of an Olympic athlete. How could she have cancer?

Tears, fear and darkness seemed to be with us every moment during the next few days. What happens now I wondered? The scripture "They that wait upon the Lord shall renew their strength" helped calm me.

Knowing the healing power of nutrition, we sought the advice of a naturopathic doctor. In addition, we also saw an oncologist. Heidi's blood work revealed a very extreme phosphorous-calcium ratio, very low iron and other poor markers.

Recommendations were given to stop drinking sodas and increase plant-based foods. I knew we could influence these markers with concentrated plant juices. However, it was highly recommended by the oncologists that Heidi have both radiation and chemotherapy for her cancer. I was silently hoping for no chemo to better protect her body systems for the upcoming challenge, but it needed to be her decision.

It was about five days into the ordeal, at the end of a prayer meeting, when a gentle, male voice spoke quietly, "There are other ways to heal besides chemo you know." He turned to me and added, "Look into green barley." He had used the product from The AIM Companies and was confirming what I already knew about the power of plant juices.

Heidi decided to do only the radiation therapy in conjunction with high-level nutrition to build healthy cells. With God leading the way and BarleyLife as her nutritional armor, she set out to gain her health back.

Along with giving her barley grass juice powder, we added freshly juiced carrots and beets, omega-3 and and FloraFood, all in mega doses. We also nutritionally upgraded her diet.

During the first week, her blood work began to move back towards normal. She was able to continue her radiation on specific tissues without her blood going into a critical zone. Each week the tumor shrunk dramatically. The oncologist was amazed.

Heidi took the winter term off for the therapy and to concentrate on internally building her body. Only two and a half months later at her final checkup, the doctor said, "As far as I'm concerned, you are healed." These words will never be forgotten.

Today Heidi is fine, fit, a physical therapist and the mother of three little boys. Thank you, Lord!

I continue to reach out and teach the power of BarleyLife and plant concentrates to those with health issues, as well as to athletes to upgrade their performances. I have seen many sick bodies become well and athletes build more stamina. Green is golden, especially in the most elite form.

Capturing the living "Life" in a powder is most difficult. The AIM Companies has done it with BarleyLife." - Judy Rowe, Springfield, Oregon 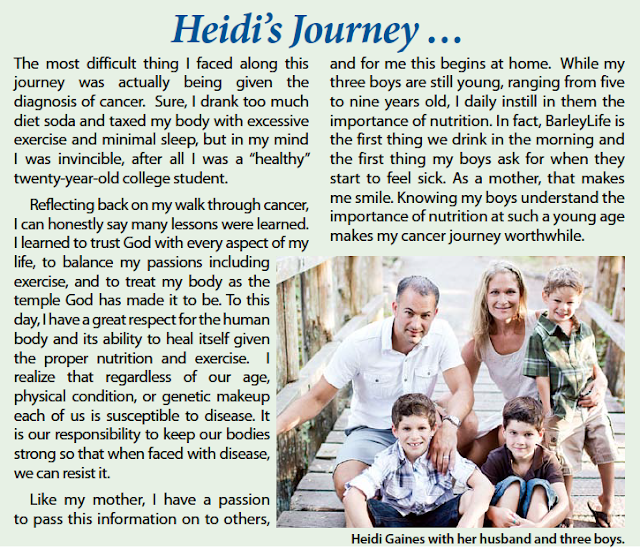