"Taking my BarleyLife helped with my energy and also the quality of my milk." 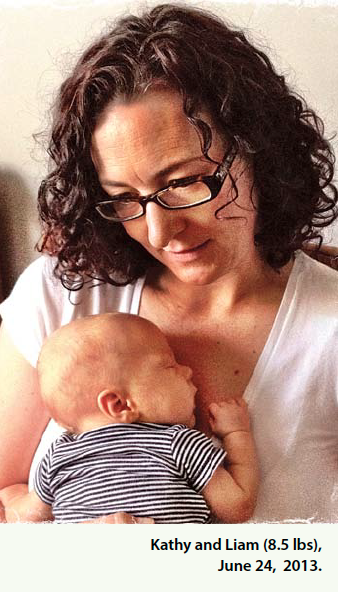 "It took me a while to get pregnant, but Ken and I were overjoyed when it happened. During that time I was taking my BarleyLife faithfully and continued to take it every day while I was pregnant.

However, there was a period of a couple of weeks when I was waiting for it to be delivered because I had run out. I really noticed the difference in my energy levels, so I was happy when my BarleyLife arrived.

My pregnancy was going well, but due to medical issues beyond our control, Liam arrived twelve weeks early on March 19, 2013. We were taken completely by surprise and totally unprepared for what lay ahead of us.

Liam weighed two pounds, six ounces at birth. He was hospitalized for the twelve weeks until he was 'term.'

During those weeks, Liam was fed my breast milk through a tube. Because I couldn't naturally breastfeed him, I needed to create a false demand by pumping every two hours for the first couple of weeks - about ten times a day - and then managed to scale back to every three hours, which was eight times a day.

The process was very tiring because on top of the pumping, we needed to see Liam in the hospital every day. Taking my BarleyLife helped with my energy and also the quality of my milk.

Liam progressed very well during his stay at the hospital. The doctors and nurses were amazed at how well and rapidly he improved and gained weight over the weeks. They said that it was mainly due to my milk being rich and nutritious.

Some of the nurses had said it would be easier if I let Liam go onto formula, but I was adamant that I wanted to give Liam the best start that he could get from me.

Liam has been home now for four weeks, and he is fed exclusively with my breast milk. He now weighs eight pounds, eleven ounces, and continues to grow and amaze us every day.

I continue taking my BarleyLife every day, and I know it makes a difference for both Liam and me." - Kathy Campbell, Etobicoke, Ontario

P.S. BarleyLife is for people who believe nutrition matters. To find out more about this green barley grass for kids and adults, Click Here.
Testimonials should not be construed as representing results everybody can achieve.BarleyLife® is not intended to diagnose, treat, cure or prevent any disease. Results may vary per person.