"The abnormal bleeding stopped and my cycle returned to normal." 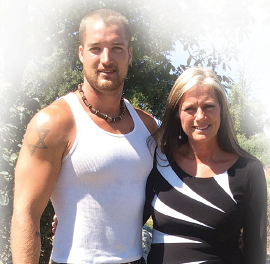 After giving birth to her son, Elizabeth DeGroot suffered from abnormal bleeding for two years.

"I had two dilation and curettage surgical procedures done, but they didn't work. Nothing seemed to work," Elizabeth explained.

"My gynecologist said he could give me medication, but it would cause cancer in about ten years."

Instead, Elizabeth tried homeopathic treatment. After a year, her frustrated naturopath told her that only God could heal her.

"So I prayed to God," Elizabeth recalled, "telling Him I couldn't do much more. I needed an answer."

Around that time, her husband had a house-painting job. One day the owner asked him if he was a Christian and he responded affirmatively.

The woman wanted to know because the night before she had been awakened by God, who told her the wife of the painter had to read the book, Green Leaves of Barley.

"That was weird," Elizabeth acknowledged, "but I did get the book and then, trusting the answer, bought some BarleyLife."

"Within five and a half months, I went from feeling like an eggshell with nothing inside - no emotions - to feeling happy again and excited about being alive.

"And the abnormal bleeding stopped and my cycle returned to normal."

Along with giving BarleyLife to her two sons and a daughter, Elizabeth recommended it to others, including many women whose health also improved.

Something else happened when Elizabeth gave BarleyLife to her son, Ezra. He had been diagnosed with cystic fibrosis when he was only nineteen months old.

"But that went to zero after five and a half months."

"The specialist said, 'I don't know what to say about that.' Like me, Ezra took a quarter teaspoon of BarleyLife up to a heaping teaspoon in the morning and at night. BarleyLife brought him to where he is today: thirty-one years old and serving in the military."

Elizabeth is incredibly grateful for the health improvements she, her family and many other people have experienced.

P.S. BarleyLife is a nutritious green powder made from young barley grass.
Why not put the odds for good health in your favor?