You Can Relax with Composure 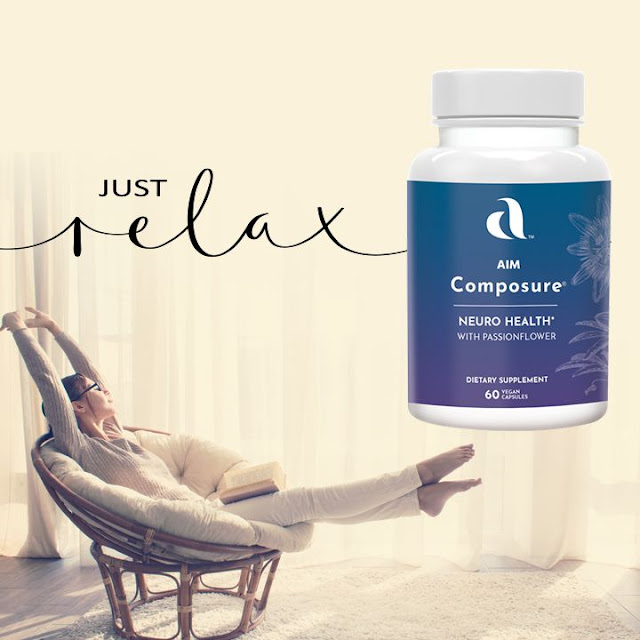 One of the best-selling products at The AIM Companies is Composure.

The unique blend of all-natural herbs help maintain neuro health and are useful during times of stress.

Passionflower has been shown to be an especially effective anxiety-relieving herb. It was chosen based on a long history of documented use to relieve muscle tension and calm anxiety, which contributes to getting a good night’s sleep.

The blend also works to reduce inflammation through antioxidants and improve acidity levels in the stomach, both of which have been linked to an overall improvement in mood.

"Without Composure, I don't know what I would have done. My husband, Charles, has dementia and giving him two capsules of Composure in the morning and three at night relieved his frustrations during the day and helped him to sleep at night. I was able to keep him at home for five years, instead of the three months that doctors had predicted before needing to put him in a care facility. I hope this helps others who are dealing with dementia. I take Composure as well and could not have done without it." - Katrina Windels, Creston, British Columbia

"I take two capsules each night, two to three hours before retiring and I sleep solid all night long. Before Composure, I was up three to five times a night and could not stay asleep. As a realtor, I put in long hours plus the stress. Composure is giving me the rest I haven’t had since I was very young. Thank you for such a wonderful product." - Sandy Dingler, Ocala, Florida

"I have been taking Composure for many years as a sleep aid. Depending on what the day has been like, I take two to three capsules about half an hour before bed. They work wonderfully. I relax and sleep soundly. When I wake up, I feel great with no fogginess or drowsiness." - Nancy Kipp, Littleton, Colorado

Testimonials should not be construed as representing results everybody can achieve. Composure® is not intended to diagnose, treat, cure or prevent any disease. Results may vary per person.