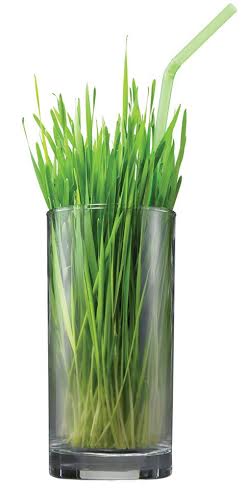 Barley grass is one of the green grasses - the only vegetation on earth that can supply sole nutritional support from birth to old age.

Agronomists place this ancient cereal grass as being cultivated as early as 7000 B.C., probably in the dry lands of south-western Asia.

In the West, barley grass was first known for the barley grain it produces; there is written mention of the grain as early as 2800 B.C. in Babylon.

Barley is also a biblical food, mentioned no fewer than thirty-two times in the Bible.

Green grasses are at their nutritional peak before they enter the reproductive cycle.

To create grain, the plant must channel its nutrition up to the seed heads.

When grasses are harvested before they enter the reproductive cycle, they have a different chemical makeup from their adult, largely depleted, counterparts.

Young grasses contain about the same vitamins and minerals as dark green vegetables.

When these grasses are juiced and concentrated, as in BarleyLife and BarleyLife Xtra, they are far superior nutritionally.

This amazing discovery is supported by data.

Barley grass is considered the most nutritional of the green grasses.

The pioneer of green foods, Dr. Yoshihide Hagiwara, M.D., is responsible for more than two hundred published studies on green and natural foods. After studying green plants for decades, he said,

"It is clear to me, then, that the leaves of the cereal grasses provide the nearest thing this planet offers to the perfect food. For reasons of palatability, higher nutrient content, and favorable harvesting features, green barley stands out as the best among these."

Barley grass contains a wide spectrum of vitamins and minerals, amino acids, including the eight essential ones that we must get from our diets, proteins, enzymes, chlorophyll, and phytochemicals.

Amino acids are the building blocks of proteins, which are the major constituents of every cell and body fluid, and are thus necessary for the continual cell building, cell regeneration, and energy production that we need for life.

An added benefit of the green barley leaf proteins is they are polypeptides - smaller proteins that can be directly absorbed by the blood, where they promote cell metabolism (the chemical changes that we need to live).

Enzymes are essential for the thousands of chemical reactions that occur throughout the body, including the production of energy at the cellular level, the facilitation of digestion, the absorption of digested nutrients, and the rebuilding and replenishing of all that the body requires for metabolism to occur.

The enzyme superoxide dismutase (SOD) is a powerful antioxidant thought to slow the rate of cell destruction by providing a defence against free radicals, especially the most prolific free radical, superoxide.

Superoxide free radicals are thought to be responsible for the breakdown of synovial fluid that leads to the inflammatory response in joints.

Much of the current clinical research on SOD is focused on arthritis, bursitis, and gout.

Low levels of SOD are also associated with cataracts and other degenerative diseases.

In addition, it is believed to help the body use zinc, copper, and manganese more effectively.

As SOD is heat sensitive, it is thought to be the yardstick for measuring overall enzymatic activity.

Enzymes are not found in processed foods as well as many cooked foods.

Chlorophyll has been studied for its potential as a deodorant, in stimulating tissue growth, as well as in stimulating red blood cells in connection with oxygen supply.

Perhaps most remarkable is the similarity between chlorophyll and the red pigment in blood. Research in the 1940s demonstrated that the two pigments react the same during breakdown.

It has been found to reduce faecal, urinary, and body odour in geriatric patients.

In addition, it has anti-inflammatory, antioxidant, and wound-healing properties.

Phytochemicals are simply plant chemicals that are thought to be essential to health.

They have been associated with the prevention and treatment of at least four of the leading causes of death - cancer, diabetes, cardiovascular disease, and hypertension - and with the prevention and treatment of other ailments, including neural tube defects, osteoporosis, abnormal bowel function, and arthritis, as well as numerous chronic conditions.

The value of barley grass

Green barley grass has a high alkalizing effect, which helps keep the ratio between acidity and alkalinity in our body fluids balanced.

Our cells cannot adequately function if the pH (which measures acidity and alkalinity) is not in a narrow range. Most processed foods are acidic, and when we consume too many of them, the acidity-alkalinity balance is upset.

According to scientists, lutonarin is the superior antioxidant. Antioxidants protect cells from free-radical damage.
P.S. BarleyLife is a nutrient-dense, green powder made from young barley grass. For over thirty years, researchers have found young barley grass to be one of the most nutritious plants on earth.

Click Here to see more about Nutrition That Works.