Vitamin A Moves Immune Cells to Your Gut 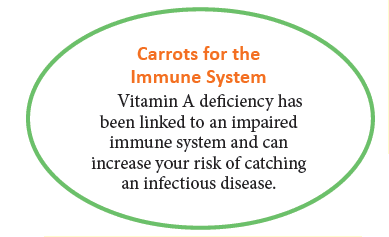 You may have heard that seventy percent of your immune system is in your gut. That’s a neat, simple and surprisingly true claim.

But why is seventy percent of the immune system located there?
Is it because of the large amount of symbiotic gut flora that calls your stomach home?
Well, partly, but it seems it’s a bit more complicated than that.

Here is the million-dollar explanation from some scientists who published a study in the journal of Clinical and Experimental Immunology:

The gastrointestinal system plays a central role in immune system homeostasis. It is the main route of contact with the external environment and is overloaded every day with external stimuli, sometimes dangerous as pathogens (bacteria, protozoa, fungi, viruses) or toxic substances, in other cases very useful as food or commensal flora. The crucial position of the gastrointestinal system is testified by the huge amount of immune cells that reside within it. Indeed, gut-associated lymphoid tissue (GALT) is the prominent part of mucosal-associated lymphoid tissue (MALT) and represents almost 70 percent of the entire immune system; - Source Here
The ten dollar explanation: necessity.

We eat things with germs and fungus on them and those things go right to our tummies. We can’t not eat, so our guts became the central loci for the defenses of our body.

We can also thank our belly-bound buddy, the gut flora, for the role it plays keeping us healthy.

The gut flora is basically a gatekeeper that spurs the immune system into action whenever it/they come across something it/they don’t particularly like.

That’s why probiotics usage is so important, and all that lymph tissue represents the bulk of the human body’s ability to fight off invaders when our bossy gut flora commands it.

So where does vitamin A fit in to this fine system?

For years studies have shown that when someone was vitamin A deficient, their immune system was also in tatters. However, it wasn’t quite clear why.

Well, today some scientists appear to have an answer. According to a study published in the July issue of Immunity, retinoic acid a metabolite from digested vitamin A is necessary because it guides innate immune cells to their proper places. The retinoic acid activate receptors that send them straight to the intestines where they settle in mucosal barrier tissues.

"It is important that these cells be concentrated in mucosal barrier tissues, as opposed to scattered throughout the body, because these tissues are the point of entry for many infections from bacteria, viruses and parasites,” Kim said. “Now that we have established the system of migration for these cells, we can play with it a little and see what changes the behavior and function of the cells."

So make sure to eat your carrots. They are essential to your good health.

P.S. Just Carrots is made from one hundred percent natural carrot juice, with only the fiber removed.
It takes 25 pounds of raw carrots to make one pound of Just Carrots powder.
How many fresh carrots have you eaten today?