Is Young Barley Grass a Vegetable? 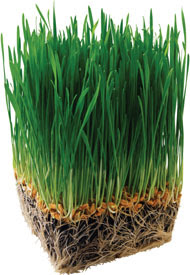 According to science, the green leaves of barley grass are considered a vegetable.

"The fruit is the part of a flowering plant that develops from the ovaryand contains the seeds. This includes sweet fleshy fruits and some vegetables like zucchini, eggplant, cucumber, tomatoes, sweet peppers and nuts. Vegetables are herbaceous plants cultivated for food. Different parts of the vegetables are eaten. Examples: the fruit (eggplant), leaves (spinach, cabbage, lettuce), bulb (shallots, onions, fennel), the tuber (potatoes), the germ (soya), or the root (carrots, turnips)." - The Baltimore Sun

Barley seeds, a grain, would be the fruit of the barley plant. Nuts, corn kernels and seeds are also considered fruits from a scientific standpoint.

The reason many people often get confused as to which foods are fruits and which are vegetables is due to culinary or cooking classifications. This is a system of plant classification based on taste, not science. The culinary world says fruits are sweet, while vegetables are more sour.

By their nature, cucumbers are fruits. However, in the kitchen they are considered vegetables. Tomatoes are well known for walking a fine line between the worlds.

To learn more about this nutrient-dense green powder, Click Here.