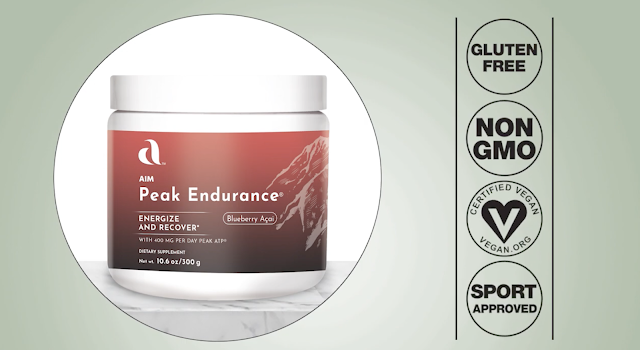 The results you have come to appreciate from Peak Endurance are now delivered in a bold, new flavor, with added vitamin C and natural electrolytes.

In addition to the flavor change, the formulation of Peak Endurance has undergone some improvements. Notably, the vitamin C content, which previously accounted for fifty percent of a person’s Recommended Daily Intake (RDI), now accounts for seventy-two percent of the RDI for vitamin C per serving.

A new ingredient in Peak Endurance, coconut water, is considered nature's best electrolyte. It contributes to the proper balance of the product of all six major electrolytes (sodium, potassium, calcium, phosphorous, magnesium and chloride).
Other sport and energy drinks, like Gatorade® and Red Bull®, contain at most two of the six major electrolytes.

When it comes to all-natural energy, Peak Endurance can’t be beat. As consumers turn to quick-fix energy boosts to get them through the day, they fail to consider the drawbacks of caffeine in products like Red Bull® and 5-Hour Energy®.
Peak Endurance is caffeine free. It is naturally low in sugar. It is a healthy energy source with a combination of vitamins and minerals that you won’t find elsewhere.

Olympic speed skater J.R. Celski, sponsored by The AIM Companies, loves the improved Peak Endurance. He has been using the new product during the current World Cup speed skating season. In the first World Cup event, J.R. set a world record in the 500-meter race.

Peak Endurance helped power J.R. Celski to a world record. What can it do for you?

Peak Endurance helps to compensate for the decline of blood ATP levels, which can slow you down and decrease your levels of energy.

"The new formula gives me serious energy after I drink it." - Chris Byrnes, Milwaukee, Wisconsin

"I cannot even tell you. Today is a cold, rainy, snowy day here in Idaho. With my fibromyalgia, this would have crippled me. Not today, though. I took two scoops this morning when I woke up. I had class for college. I went to the rec center. I ran a little bit. I could have kept going all day. Because the cold didn't hurt me like it once did." - Mary Ann Peck, Nampa, Idaho

"The key changes to provide more energy are improved solubility and beet juice. The new Peak Endurance has great solubility. We added beet juice for a natural color, but there’s a few heart benefits tied to beets. Beet juice modulates the production of nitric oxide from the endothelial cells in our capillaries. Nitric oxide is a vasodilator, which signals our capillaries to expand and improve blood flow, without increasing our heart rate. ATP does this as well. So these two ingredients now compliment each other nicely." - Quality Assurance and Product Development Manager at The AIM Companies

Note: The number one troubling ingredient in 5-Hour Energy® is potassium benzoate. It is a food preservative that can cause damage to human DNA. When it is combined with vitamin c (90 mg per serving in 5HE) it forms benzene, which is a known carcinogen.

Also, Red Bull® was added to the comparison chart on the back of the Peak Endurance® datasheet, for reference. Red Bull® has 151 mg of caffeine, 52 grams of sugar and 213 calories, per 16 ounces.
When you use caffeine and sugar to enhance energy, you are likely to crash and cause adrenal fatigue, among other things.