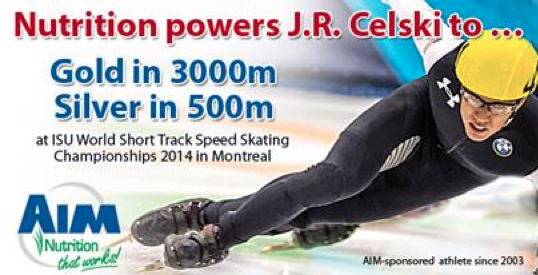 Congratulations to AIM-sponsored speed-skater J.R. Celski, who won gold in Montreal at the world championships.

Powered by Nutrition That Works, three-time Olympic medalist J.R. Celski won the gold medal in the men’s 3,000-meter superfinal with a time of four minutes and 59.528 seconds. Shi Jingnan of China placed second in 5:01.801 and Sochi gold-medal winner Viktor Ahn of Russia was third.

He finished second overall at the world championships for the second time in his career, repeating his feat from 2009.

To learn more about the story of J.R. Celski and how he overcame a gruesome leg injury, Click Here.