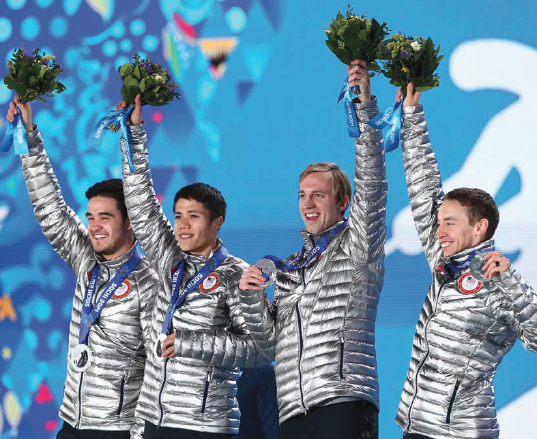 Congratulations to J.R. Celski and Team USA on their Silver Medal
in the 5,000-meter Relay in Sochi, Russia, 2014

Powered by 'Nutrition That Works', AIM-sponsored J.R. Celski led Team USA to the silver medal in the 5,000-meter relay at the 2014 Winter Olympics in Sochi, Russia. He celebrated the silver along with his teammates Eddy Alvarez, Jordan Malone and Chris Creveling.

The silver medal is Celski's third career Olympic medal to go along with a pair of bronze medals from the 2010 Vancouver Olympics. There may be even more in his future, since NBC named J.R. Celski one of the top U.S. athletes to watch at the 2018 Winter Olympics in South Korea.

For over a decade, The AIM Companies is proud to have sponsored J.R. Celski and to have seen him through his greatest trials and triumphs. We consider it a privilege to serve as one of Celski's indispensable teams that help him perform his best. He credits AIM's nutritional benefits as the key to his performance.

"Nutrition plays a huge, pivotal role in how I perform every day," J.R. said.

J.R. Celski also excels with the help of his team of family and friends - parents Bob and Sue Celski, brother Chris Celski, girlfriend Andréa Do Duc; plus extended friends and family.

Celski was the face of the U.S. short track speed skating team in Sochi, both on television broadcasts and on the ice. He anchored the final leg of the 5,000-meter relay, pressing the Russian team right up to the finish line. He was the top performer in the individual events amongst U.S. skaters. In the 1,500-meter race, he narrowly missed a bronze medal, finishing fourth in the final race.

J.R. Celski was not the only athlete to experience the benefits of AIM products. Teammate Eddy Alvarez also relies on AIM nutrition for his training and performance. Alvarez earned a silver medal in the 5,000-meter relay with Celski and advanced to the semifinals in the 1,500-meter and the quarterfinals of the 1,000-meter races in Sochi.

In the buildup to the Olympics and throughout the telecasts, J.R. Celski was prominently featured and millions of viewers were pleased to see his winning smile and hear his incredible story.

Four years ago, as the Vancouver Olympics neared, J.R. Celski suffered a life-threatening injury at the U.S. Olympic Trials. He crashed hard into the wall during a race, with his right skate slicing into his left leg, just above the knee. It opened a large, six-inch cut that required surgery and over sixty stitches to close and repair.

The gruesome injury would have derailed most athletes, but not J.R. Celski.

Rushed straight to the hospital after his fall, Celski underwent successful surgery to close the wound, marking the first step on a long road back to the ice. Overseeing his recovery was former Olympian and five-time speedskating gold medalist Dr. Eric Heiden.

Throughout the recovery process, Celski remained consistent with his use of AIM nutrition - even boosting his daily dosages to speed recovery. The added nutrients along with expert care and a strong will and determination saw Celski tear through rehab faster than anyone had expected.

He recovered in time for the Olympics, a mere five months after his career was in jeopardy. And not only did he participate, he excelled, winning a pair of bronze medals in Vancouver and establishing himself as the top U.S. speed skater for the next Olympic cycle and beyond.

The 2014 Olympics have concluded and J.R. Celski can reflect on a thrilling journey that brought him from the top ranks of inline skating to the medal stand on the worldwide stage. Since the beginning, AIM has been there, watching Celski compete and perform at the highest levels with the super fuel of AIM whole-food nutrition.

Three Olympic medals is a phenomenal achievement. Will J.R. Celski go for more at the 2018 Olympic Games? Regardless, AIM nutrition will remain essential to his good health and performance, no matter where his journey takes him.

To read more about J.R. Celski and his severe leg injury, Click Here.