Nutrition That Works for Olympic Athletes 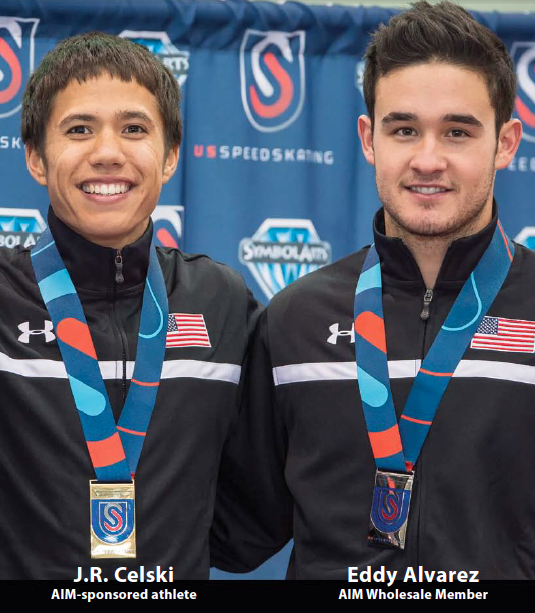 Two-time Olympic medal winner J.R. Celski has an advantage over the competition: world-class nutrition from The AIM Companies.

Speedskating is measured in hundredths of a second, so you can believe Olympic speedskaters do everything in their power to gain a competitive edge.

For the past eleven years, the extra edge for J.R. Celski has been AIM nutrition. Supplements such as RediBeets, Peak Endurance, AIMega, LeafGreens and BarleyLife have powered him to extraordinary heights in short-track speed skating: world championships, Olympic medals and and more.

J.R. Celski will be the face of the U.S. short-track speed skating team when the 2014 Winter Olympics begin in Sochi, Russia on February 7th.

And he won't be alone in his AIM-powered pursuit for gold.

Teammate and AIM Member Eddy Alvarez is also a believer in the performance of nutritional supplements from The AIM Companies. Eddy and J.R. have been friends since childhood, both coming to short-track speed skating from inline skating - J.R. in Federal Way, Washington and Eddy in Miami, Florida.

The two also share a common bond in overcoming adversity. J.R. Celski nearly saw his Olympic dream derailed when he sustained a life-threatening cut to his leg during the 2010 Olympic Trials. His miraculous recovery, aided by AIM nutrition, made it possible to excel in the Vancouver Winter Olympics only six months later, where he won two bronze medals.

Adversity for Eddy Alvarez was more recent. In 2012, Alvarez underwent knee surgery to repair torn patella tendons. Instead of hanging up his skates for good, he persevered through rehab to earn a spot on the U.S. World Cup team. He has now positioned himself as a medal favorite, along with J.R. Celski, at the 2014 Winter Olympics.

This World Cup season, the two friends have worked together on the U.S. team. Celski and Alvarez helped the U.S. men’s relay team claim the overall World Cup title in the 5,000-meter relay, earning two gold medals and three podium finishes during the season.

In Sochi, all eyes will be on Celski and Alvarez as two of the top medal candidates for the U.S. Olympic team.

Expectations will again be high for the U.S. team. Speedskating represents the most medaled sport for the U.S. in the Winter Olympics, with eighty-five medals won over the years. The Vancouver Olympics were the best year yet, with the U.S. winning six speed skating medals.

J.R. Celski and Eddy Alvarez have done everything they can to position themselves for a memorable Olympics. Determination, hard work and world-class nutrition have powered them to the top of their game. Now the top of the medal stand awaits.

Will the Sochi Winter Olympics have more medals in store?