What People Are Saying About BarleyLife 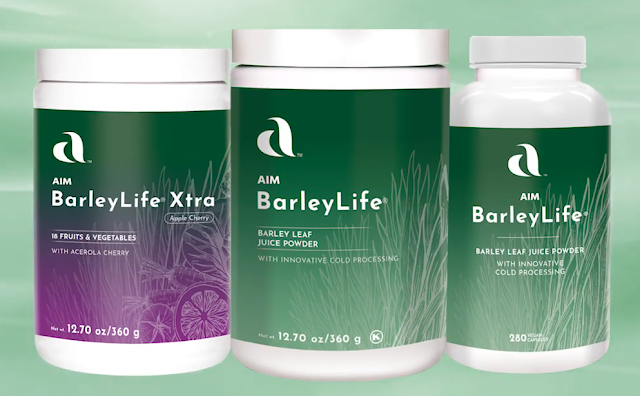 "Before my husband and I started taking AIM's green barley juice, he was suffering from leg pain. The pain was so bad, Frank had to lie down on the couch with his legs raised to relieve the pain.

Frank started taking the green barley juice in January of 2000. No more pain! No more lying down with the legs up! He feels great!" - Renee Grainger, Belton, Missour

"I've been taking BarleyLife for over twenty years. When it was first introduced to me, I had multiple health problems, including high blood pressure. All those problems disappeared, so I do not want to go a day without it." - Cheryl Huxter, Steady Brook, Newfoundland, Canada

"I'm thirty-five and suffered from reflux every day, so bad that I dreaded eating anything. And I'm a nurse! I am now pain free for the first time in years." - Lissie Joyner, Nashville, North Carolina

"When we lived in San Antonio, my wife and I drove down to the border town of Larado. This elderly lady was there with her hands and fingers constricted like claws, from arthritis. I was amazed at how bad they were.

I suggested she start taking large amounts of BarleyLife. When I say large amounts, I'm talking about five to seven tablespoons, spread throughout the day.

We went back several months later. She comes up to me with tears of joy running down her face, saying in Spanish, 'Look! Look!' and freely moving her fingers around. 'Look at what this has done for me!' " - Darryl Hicks, Apple Valley, Minnesota

"I believe in BarleyLife. I do not have eczema any more. I took AIM's barley leaf juice powder for three months and it disappeared." - Cappi Sue Peters, Lincoln City, Oregon

"I started using AIM's barley product back in 1996 and was amazed to experience such good results so quickly. Mental clarity and sharpness were the first benefits I noticed after only three weeks on the product. My slurred speech improved and I could again get my tongue to speak what my brain was thinking. Also, my energy greatly improved so I no longer needed daily naps." - Deborah May, Bigfork, Montana

"When I was eighty-eight years old, I came down with a cough so bad I had someone call the ambulance. I was in the hospital for a week and in rehab for another week. They said if I hadn't put myself in the hospital I wouldn't have lived. I give BarleyLife the credit for staying alive. I am ninety years old now and people are amazed that I still drive a car and work in the flower and vegetable garden." - Lucile R. Hinchey, Attleboro, Massachusetts

"I've been taking BarleyLife for the past two weeks. I lost eight pounds the first week and I lost another four pounds to bring the total weight loss to twelve pounds in only two weeks. In addition to losing the weight, BarleyLife has given me a spark of energy, better sleep, lower cravings and better concentration. Overall, I feel better than I have felt in years." - RoseMary Hands, McIntyre, Georgia

"BarleyLife gave me my life back when I was miserable. Now I feel normal again. Thanks from the bottom of my heart." - Terri Howell, Helena, Montana

"I've been using BarleyLife for 15 years now and it is an awesome product. It will kick a cold out of you in just a day or two." - Vicky Haneline, Norfolk, Virginia

"In 1991, through a routine eye exam, I discovered I was nearsighted. I had to wear glasses to drive my car, go to a theater, or sporting event. Now I no longer need to wear glasses." - Laura Eilers, Conway, Arkansas

"Rehearsals and classes can carry on for hours. If you don't feed your body what it needs, you will become weak and never dance professionally. My entire life I've used BarleyLife Xtra. I either take it with fruit juice in the morning or mix into a fresh fruit drink to take during class. It gives me energy to push through and keep alert all day." - Chelsea Wewege, ballet dancer, Durban, South Africa

"I no longer suffer from osteoporosis, hypothyroidism, fibrocystic breast disease, bladder control problems, locked up joints, dry skin and nails, muscle cramps, and lack of energy. I now have a new body! I have energy and endurance to keep up with my four adult children and nine grandchildren. I feel wonderful!" - Janice Gravely, Rocky Mount, North Carolina

BarleyLife and BarleyLife Xtra are for people who believe nutrition matters. To learn more about this nutritious green powder for kids and adults, Click Here.