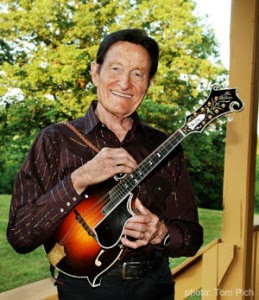 Sometimes you can tell a lot by a nickname.
"The Iron Man of Bluegrass" fits Jesse McReynolds, from Gallatin, Tennessee and a member of The AIM Companies.

What is not so obvious, however, is where he gives credit for his endurance and the nickname his fellow musicians have given him.

Jesse is eighty years old and credits AIM nutritional supplements for his health and vitality. He has been taking them for more than twenty years.

"I started with AIM when I met this lady in Florida," recalls Jesse. "She was in her 50's, but she looked like she was in her 30's. I have taken AIM products every day for more than twenty years. Whatever it does, it works."

It must. Jesse has been a Grand Ole Opry musician since 1964 and plays in a band, The Virginia Boys, that tours the country playing bluegrass music.

"I usually work forty and fifty festivals a year in the United States," he says. "It should take a toll, but I have held up pretty well so far."

Jesse plays the mandolin and sings tenor. For years Jesse and his brother, Jim, were members of the band. Jim passed away in 2002, but the family connection lives on.

Two of Jesse's grandchildren sing in the band. When Jim passed, a musical duo that had been playing together for a record fifty-five years came to an end.

While Tennessee is home, the world has proven to be his stage. He has performed all over the U.S., in Europe and in Africa. He has been nominated for a number of Grammys and has won his share in his sixty years in music. 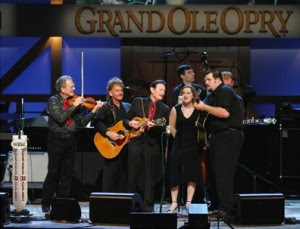 Most recently he was nominated for Instrumental Recording of the Year for his collection of mostly original songs.

He is credited for developing cross-picking and the split string styles on the mandolin.

He has even dabbled some in rock 'n roll. Remember the rock group, The Doors? He played the mandolin on one of the group's more successful albums, called The Soft Parade.

In addition to his beloved mandolin, Jesse plays guitar and the fiddle.
He is credited with creating an instrument only the most avid of music buffs would recognize, the mandolobro. It's a combination of the mandolin and the Dobro. A mandolin is a member of the lute family, an instrument that is plucked and strummed. A Dobro is a type of resonator guitar.

Jesse has provided background music for the likes of legendary rocker Chuck Berry and fellow mandolin player and vocalist Bobby Osbourne. One of his contemporaries says to be a successful and sought-after studio musician may be the highest compliment for an artist, for it is a sign you really know your stuff.

Berry once said of Jesse and his brother, Jim: "To me, Jim and Jesse's style is wonderfully unique and readily accessible to any musician who admires originality."

The praise comes from the media as well. Muleskinner News describes Jesse as "the foremost innovator in bluegrass music" with "unsurpassed technical expertise" on the mandolin, adding, "most importantly there is no better mandolin player and no better gentleman" than Jesse.

Jesse and his wife, Joy, have been married for thirteen years. She says Jesse may be an iron man, but he also has a heart of gold.

For sixteen years he has hosted the McReynolds Memorial Benefit Show, normally held each year in February. It began as a way to assist Jesse's son in covering his medical bills as a result of having multiple sclerosis. The son passed away in 2000, but the show lives on - "to help someone in need," according to Joy.

"We are blessed to be able to continue this for folks who need it." This year funds raised from the event went to the wife and son of a musician who died from a brain tumor.

"Life is so sad sometimes," says Joy. But the benefit show can aid in lessening the accompanying grief.

Jesse is no passive supporter of BarleyLife. His website calls attention not only to his belief in the product, but he uses a number of testimonies as well. He even categorizes the help it provides.

Asthma: One lady's son suffered from it since he was a baby. Then one year she received a Christmas gift of the green barley powder. She began giving it to her son. His asthma became "much less severe and shorter in duration." He is now 20, has been taking it for eight years, and his asthma is under control.

Arthritis: "This product helps my arthritis and seems to improve my feeling of well-being."

Chemo Side Effects: "I was diagnosed with leukemia in 2006." The various chemo treatments and medications caused "many unpleasant side effects." Then her grandmother told her about BarleyLife. "I was hoping it would do something good for me. Guess what? It did. I consider myself healthy again, and I am back working in my garden."

Wife Joy: "I have watched my husband, Jesse, take BarleyLife. He even takes it on the road with him. He stays so active and imaginative, always writing songs, playing music, joking around. I am taking it now and I look forward to keeping up with him."
When Jesse is not on the road, you can find him and his wife at their Pick Inn, a venue near Nashville for weddings, receptions and any other event deemed appropriate for the resort.

The location is also home base for a radio show that reaches listeners within a 150-mile range of Nashville. There is recorded music, live music and call-ins. One listener describes it "as kind of like an old-fashioned radio show."

Jesse uses the show to talk about BarleyLife, stay in touch with his fan club and talk about the joys of bluegrass music.

If the true mark of someone is the description given by others, then Jesse need not fear the path he has taken, the decisions he has made in his eighty years.

"He is an inspiration to everyone," says his proud wife.


The health of an untold number of people have been changed for the better, by taking BarleyLife. To learn more, Click Here.