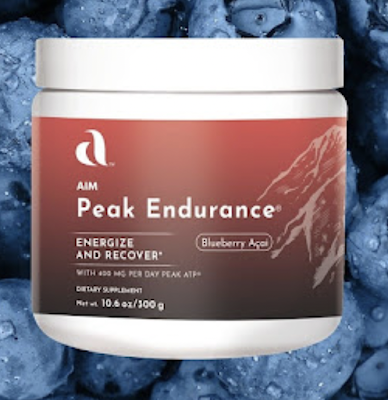 The results you have come to appreciate from Peak Endurance are now delivered in a bold, new flavor with additional vitamin C and natural electrolytes.

In addition to the flavor change, the formulation of Peak Endurance has undergone some improvements. Notably, the vitamin C content, which previously accounted for 50 percent of a person's Recommended Daily Intake (RDI), now accounts for 72 percent of the RDI (USA) for vitamin C per serving.

Sodium chloride has been replaced with natural sea salt providing 94 mg per serving.

A new ingredient in Peak Endurance is coconut water. It is considered nature's best electrolyte and contributes to the product's proper balance of all six major electrolytes (sodium, potassium, calcium, phosphorous, magnesium, and chloride).
Other sport and energy drinks like Gatorade® and Red Bull® contain at most two of the six major electrolytes.

When it comes to all-natural energy, Peak Endurance can't be beat. As consumers turn to quick-fix energy boosts to get them through the day, they fail to consider the drawbacks of caffeine in many of the energy drinks in the marketplace.
Peak Endurance is caffeine-free. Naturally low in sugar, it is a healthy energy source with a combination of vitamins and minerals that you won't find elsewhere.

"I began taking Peak Endurance the month after it was introduced. This product provides an additional boost of energy within an hour of consumption. I've learned that it's important to try Peak Endurance at different times of the day to determine what works best for me. I take BarleyLife® just before bedtime, but Peak Endurance works best during daylight hours. Generally, I add Peak Endurance to a fruit-filled protein smoothie for an additional energy kick and health benefit. I've been using AIM products for over fifteen years and remain strong, healthy and active at age fifty-eight! It's great to feel good!" - Deborah Niles, Coffeyville, Kansas

"Peak Endurance is a lifesaver if you are working a high-stress job. I can confidently say Peak Endurance helped me keep my composure, energy, and stamina every single day I was at work. If you get worn out at work, then this is the stuff for you! Thanks, AIM!" - Ben Millikan, Salem, Oregon

"I view Peak Endurance as my own personal miracle! Within days of taking the product, I had a vast decrease in the amount of my pain. I still have challenges related to my fibromyalgia, but with my pain under control, everything else seems easy." - Judy Taylor, Nampa, Idaho

Testimonials should not be construed as representing results everybody can achieve. Peak Performance® is not intended to diagnose, treat, cure or prevent any disease. Results may vary per person.