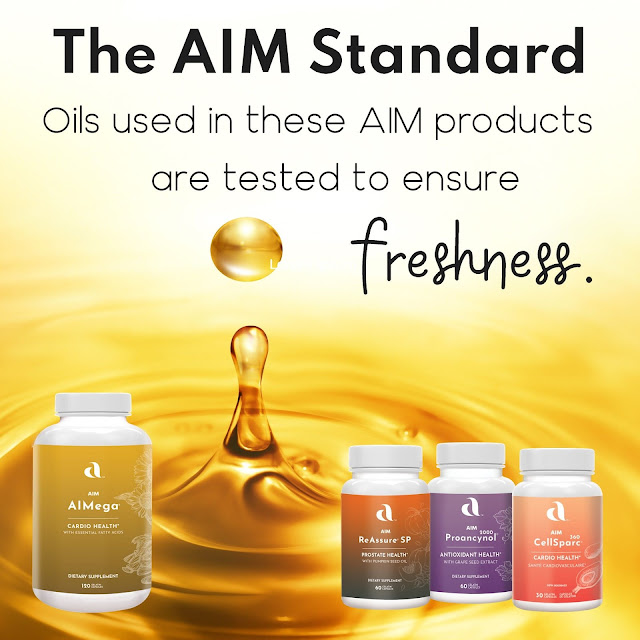 With the power of coenzyme Q10, omega-3 and omega-6 essential fatty acids, heart health supplements from The AIM Companies are on the cutting edge.

These are two of the most effective, all-natural cardiovascular supplements available. For matters of the heart - be it blood pressure, heart disease or other issues - supplements like CellSparc 360 and AIMega have you covered.

The heart muscle uses more energy than any other tissue. Therefore, it requires the highest concentration of CoQ10. As we age, our bodies produce less CoQ10. When the body's supply of CoQ10 is depleted, the heart is one of the first to feel it.

Studies have confirmed the importance of CoQ10. A Chinese research team found that CoQ10 supplementation improved the health of arteries, due to increased blood flow and cellular energy.
Spanish researchers examined the effect of CoQ10 and a healthy diet and found that these factors can help reduce the risk of heart disease.

Many other studies have shown the benefits of CoQ10 in areas such as how efficiently the heart pumps, how well the heart may tolerate exercise and the amount of blood pumped by the heart.
Research has led many to believe increased supplementation of CoQ10 may decrease the amount of medication used by heart disease patients.

AIMega provides a healthy ratio of omega-3 and omega-6 essential fatty acids, from sources of "good fats." The body is unable to manufacture these omega fatty acids on its own, adding importance to proper diet and supplementation. Inadequate intake of Essential Fatty Acids is one of the most widespread nutritional deficiencies of the modern diet.

One of the most important roles of essential fatty acids is their reduction of inflammation throughout the body. Inflammation can damage blood vessels and lead to heart disease. Studies show Essential Fatty Acids maintain healthy blood pressure, blood lipids and heart rate, as well as their role in healthy immune system function.

CellSparc 360 and AIMega, rich in CoQ10 and essential fatty acids, are part of the Heart Health Starter Pack. In addition to these products, the Starter Pack also contains products that boast additional cardiovascular benefits from garlic and fiber. Both garlic and fiber have been shown to lower cholesterol.

"In 1979, pregnant with my first child, I had my first heart palpitations. My heart raced out of control, and it scared me so badly that I sat by the phone with my hand on the receiver ready to dial 911. I soon learned to relax and breathe to calm them - and me - down.

About six years ago, I found a cardiologist and made an appointment because my heart palpitations were so frequent and so long that I couldn't function normally and always feared that they would come at a very inconvenient time or when I was in a situation where I couldn't leave. You see, I had to sit straight up, stretch my torso, and hold my breath - I looked like a weirdo.

Well, my cardiologist prescribed the blood pressure medicine Cardizem®. I didn't want to take it, but I did go on the medicine to see if it would control my racing heart.

It did help. My spells went from lasting up to six hours to only a few minutes. However, I still had anywhere from four to ten short episodes a day. Most of the time, if I felt one coming on and if I stretched and breathed right, I could stop it within a few seconds.

And oh my, I can't believe it! I have literally gone from four to ten short episodes a day to only having a few two-second episodes per week. Wow! This is very, very exciting for me. I can't wait to go for my annual cardiology appointment and share the news. I have been suffering with this problem for thirty years, and now it's basically gone. Gone!" - Diana Mills, Raleigh, North Carolina


"In 1997, a friend recommended AIM products to help me get rid of a gum infection, bursitis and diverticulosis. These health problems disappeared shortly after taking the Garden Trio and Herbal Fiberblend. Soon after this, the doctor told me I had high blood pressure and gave me a prescription to lower it. The side effects of insomnia, shortness of breath and weak legs were so severe, that I could not work or exercise.
One night, I called my doctor and said I felt like I was going to die because of this medication. His response was, "You will get used to it." I was not satisfied with the doctor's advice, so I looked again at the AIM products and discovered CellSparc 360 with Coenzyme Q10.

To bring this up to date, my blood pressure has been charted for about ten years. I keep a record and my current pressure is 112 over 76. I am seventy-five years old and work a twelve-hour day. I have tremendous energy and my doctor is amazed at my physical condition. I tell everyone about BarleyLife and Herbal Fiberblend. And CellSparc 360 has given me so much energy. At my last yearly check-up, my doctor said I'm more like someone in their early fifties.

In closing, let me tell you about AIMega. I have had better eye tests with no new prescriptions in two years as well as great looking skin. In my most recent eye exam, the doctor had looked at the back of my eyeball and made the remark, "There is no evidence of any health problems - you appear to be in really good health." - Fred Hampshire, Waterdown, Ontario, Canada

Click Here to find out more about CellSparc 360 and AIMega for a healthy heart.

Testimonials should not be construed as representing results everybody can achieve. AIMega®, CellSparc 360®, fit 'n fiber® and GarlicAIM® are not intended to diagnose, treat, cure or prevent any disease. Results may vary per person.