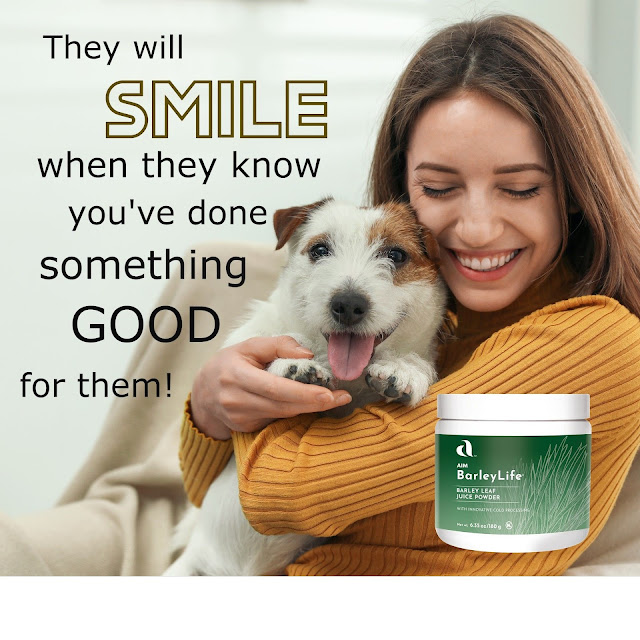 When nutrition from The AIM Companies go to the dogs, good things happen. Amy Chiang, of Richmond, British Columbia, Canada, has a pet named Fa-ji who is living proof of the benefits of BarleyLife for creatures big and small.
"I own a four-year-old Chinese bulldog named Fa-ji, which means 'prosperous.' Because he has protruding eyes and a concave nose, he experiences a lot of tears and discharge, a runny nose, foul breath and smelly ears. He often has a rash on his face. I have spent quite a bit of money taking him to a veterinarian.

Then, a friend introduced me to BarleyLife and told me it could help detoxify the body. So I added one teaspoon of BarleyLife to Fa-ji's food.
In two weeks, his symptoms have improved a lot. He has less tears and discharge, no runny nose, his rash is gone and even his ears are not smelly. Fa-ji has become very clean and healthy."

Whenever the dog days of summer are upon us, it's a good time to explore the connection between two of man's best friends: dogs and AIM products. Much of the whole-food nutrition found in supplements from The AIM Companies benefits humans as well as pets.

BarleyLife is one of the most common pet crossovers, since barley grass is a natural, nutritious part of a canine diet. Dogs seem to do well with an extra dose of green grass for a variety of reasons.
Many popular store-bought dog food brands lack the nutrition dogs need. Reintroducing the lost vitamins, minerals and enzymes through the barley plant is a natural solution.

Members of The AIM Companies have been known to sprinkle teaspoon servings of BarleyLife onto dog food. Researchers and veterinarians have traced barley's powerful canine powers to chlorophyll, vitamin C, beta carotene and enzymes.

In particular, enzymes are important for dogs because they aid digestion and absorption of nutrients, many of which go unabsorbed due to the heat processing of most foods. A lack of nutrient absorption can lead to many problems, including one of the dog world’s most famous: bad breath.
A lack of enzymes is the first step toward disease, so it is vitally important to help replenish your pet’s enzyme count through diet.

In addition to barley grass, other AIM supplements have had a positive effect on dogs' outlook over the years. Members have long been using Frame Essentials for relief of joint pain. Glucosamine, like that found in Frame Essentials, is a standard supplement for veterinary care of arthritic pets.
Debby Jansen from Nampa, Idaho, saw Frame Essentials work wonders on her dog Molly.

"I gave some Frame Essentials to Molly since she was so stiff she could hardly walk. I gave her the caps in her mouth - I had to push them to the side of her mouth so she would swallow them - and I saw a loosening of her movements in the next couple of days. She was even able to jump on the couch again, which she was not allowed to do but did it anyway when I was not looking. She was running like a pup again."

Another AIM product that has produced results is AIMega and its essential fatty acids. Long known to aid human hair, skin and nails, the Omega-3, -6, and -9 nutrients in AIMega have done the same trick on dogs like Mac, a 75-pound lab mix owned by Sandy Combs from Debary, Florida.

"Every April when the pollen count in Florida would increase, Mac would have severe skin allergy reactions that caused open sores and hair loss. After taking four AIMega a day - he takes the capsules hidden in dog treats and dinner leftovers - his skin healed up immediately. His fur grew back shiny and thick."

Whether it is barley supplementation for better breath and more energy or glucosamine and fatty acids for joints and skin, AIM nutritional supplements have loads of crossover benefits for your canine friends.
Make your dog's life a better one with whole-food nutrition from The AIM Companies.

Testimonials should not be construed as representing results your pets can achieve. Nutritional supplements from The AIM Companies™ are not intended to diagnose, treat, cure or prevent any disease.