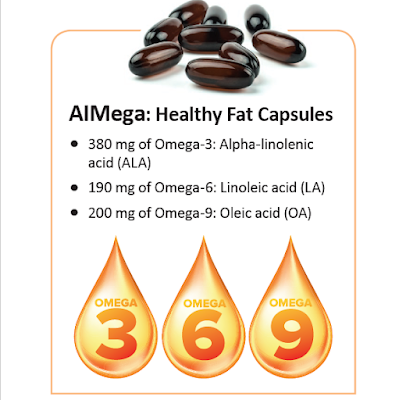 A recent study shows that people with low levels of omega-3 fatty acids are more likely to have memory problems, as well as a brain that ages faster.

"People with lower blood levels of omega-3 fatty acids had lower brain volumes that were equivalent to about two years of structural brain aging." - Zaldy S. Tan, MD, MPH, of the Easton Center for Alzheimer's Disease Research and the Division of Geriatrics at the University of California, Los Angeles.

Unfortunately, our bodies do not produce omega-3 fatty acids on their own. Essential fatty acids have to come from diet and supplementation if we are to reap the many benefits they offer.

Yet, most Americans have a hard time getting enough of this critical nutrient. In fact, the average American adult gets less than one gram of omega-3 fatty acids per day.

One way to make sure you are getting enough omega-3 fatty acids in your diet is to supplement with AIMega.

The biggest difference between AIMega and the other omega-3 supplements on the market is AIMega does not get its omega-3 from fish oil.
The omega-3 in AIMega is derived primarily from flax seed oil, which typically contains double the amount of omega-3 found in equal quantities of fish oil.

To learn more about AIMega and its many health benefits, read, "Omega-3: The Super Nutrient."

So to help protect yourself from memory problems and an aging brain, as well as lower your risk of other other health difficulties, make sure you are getting enough essential fatty acids in your diet.

AIMega® is not intended to diagnose, treat, cure, or prevent any disease. Results may vary per person.