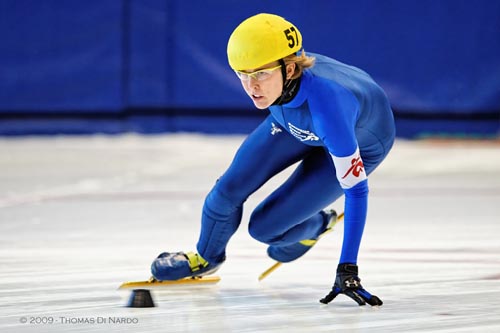 Nutrition from The AIM Companies powered short track speedskater J.R. Celski to win a pair of bronze medals at the 2010 Winter Olympics.
It also helped him recover ahead of schedule after a potentially life-threatening skating injury.
Turns out, J.R. isn't the only skater who has used nutrition from AIM to return fast and strong from an injury.

Liz Looby from Rochester, New York, sustained a serious injury during a speedskating competition, leaving both her career and mobility in jeopardy.
Fortunately, the Loobys connected with J.R. and his dad, Bob Celski.
A few days after the skating accident, Bob gave Liz a blueprint for a full recovery using nutritional supplements from The AIM Companies.

"J.R. Celski came back with AIM nutrition to medal at the Olympics," Liz's father Michael said. "Liz is doing her best to set an example of her own."

Liz's skating career began following the 2006 Winter Olympics after she saw the U.S. speedskating team compete. Her prior sports history had included track, cross country and skiing in high school.
In Rochester, New York, she found a speed skating team that offered a learn-to-skate program. Immediately, she showed promise and competed in eight competitions in her first full season. Liz trained primarily as a short track speedskater.

After high school, Liz chose to attend the University of Utah, so that she could be near the U.S. Speedskating team's facilities in Salt Lake. Her speedskating career took off from there.
By August 2009, she had qualified for the short track Olympic time trials. A month later, Liz competed in Marquette, Michigan at the same trials when J.R. was seriously injured.

During a 1,000-meter race in Milwaukee on October 3, 2010, Liz also hit a career crossroads after sustaining a devastating injury that caused extensive damage to the back of her right knee.

"According to the orthopedic and plastic surgeons in Milwaukee," Michael Looby said, "her injuries included significant lacerations to her hamstring and several tendons and 95 percent severance of the tibial nerve, which is critical to the functioning of the lower leg and to movement and sensation of the foot."

Orthopedic surgeons repaired several tendons, while a plastic surgeon using microsurgery repaired the gastrocnemius muscle and attempted to realign and suture the tibial nerve.
In Milwaukee, doctors told her that it could take two years to know whether or not nerve regeneration would occur.

Liz responded to the injury much the same way J.R. did: with determination, focus, hard work - and AIM nutrition.

Instead of coming home to New York following her care in Milwaukee, she insisted on returning to Salt Lake City to be around her friends and fellow skaters for emotional support, as well as to be near the Utah training facility to begin recovery and training.
Her enthusiasm to return to the ice was inspiring.

"Even while still in a full leg brace, Liz was back at the (skating) oval, peddling an exercise bike with her good leg and engaging in what she called 'agility crutching' - attempting to navigate cones on the running track on crutches!"

Liz kept in good spirits, too. She attended her team's Halloween party - leg brace and all - and went skydiving on her 21st birthday with friends.

At this point in her recovery, Liz and her father found out about nutritional products from The AIM Companies, after meeting Bob Celski in October 2011 through their connections with the U.S. speedskating team.

Liz's father believes the key was getting on the AIM product so quickly after her injury.

"Bob called me with both empathy and terrific information about how J.R. and his family had put together a recovery program which relied in great part upon use of several of the AIM products," Michael said.
"We knew from J.R.'s experience that the therapeutic use of several AIM products in combination, proved extremely effective in the recovery of injured muscles and tendons, and we made full use of those as a central part of Liz's recovery program."

Even beyond recovery, the Loobys found AIM products would prove beneficial for long-term use and the continuing regeneration of nerves, which was a problematic area of Liz's recovery.
The products Liz uses include BarleyLife, AIMega, CellSparc 360, LeafGreens, Herbal Fiberblend, CalciAIM and Peak Endurance.
The Peak Endurance especially proved valuable for the recovery of damaged muscles and tendons in the months immediately following her injury.

Liz's recovery reached a milestone in October 2011, just one year after her injury. Liz competed in her first 500-meter time trial in long track speedskating, which has become her new focus on the U.S. team.
Liz continues training to get a qualifying time for her return to competition before the end of the season (early March 2012).

"Good nutrition with the AIM products, good therapy and other treatments, and an amazingly positive attitude and determination on Liz's part brought the muscles and tendons around," Michael said.

"You will see that she has a determination and character much like J.R. Celski. We are hoping that, like J.R., the best is yet to come."

"Her recovery really has been remarkable! Doctors told her that she would never skate again, and I think that made her mad enough to prove them wrong!" - Jerry Search, U.S. Speedskating photographer, witness to Liz's injury