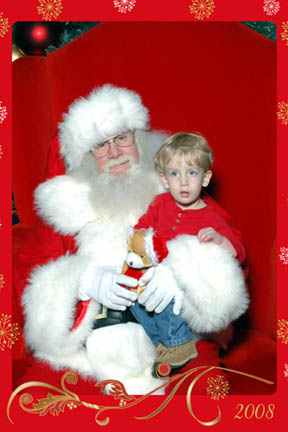 Every holiday season, my mother used to tell me, "Kids make Christmas fun and special. You get to live it all over again."
She desperately wanted grandchildren. My wife and I had a black Lab.
(What more could a mother want?)

Saturday, we took Brady, our twenty month old son, to get pictures with Santa.
It was the middle of the day. The holiday shoppers were out in full force.
Once inside the mall, we headed straight for Santa.
Walking and talking, we suddenly came to a halt.
The scene was straight out of the movie, "A Christmas Story."
The line circled forever. And there we were, at the end of it. 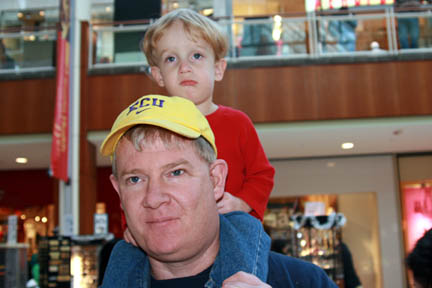 Brady was not about to stand still, of course. I did everything I could to entertain him. We even made eight trips up the escalator.
What seemed like an eternity, was actually but an hour.
Finally, it was our turn!

All went well. Brady did not cry like some of the other kids. He didn't attempt to wiggle out of the lap of the old man.
He simply... stared at him.
Quickly, the pictures were taken, the money grubbing elves waved goodbye and we headed home.

As we turned the corner into our subdivision, all of a sudden, my wife excitedly remembered, "The Christmas parade is in forty-five minutes!"
We hurriedly cleaned up, changed clothes, and headed for downtown.
Santa was on his way! 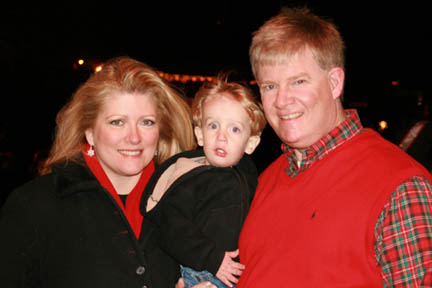 We managed to find a close parking space. Then we briskly walked towards the crowd and found a good spot among the parade watchers.
This was going to be fun!
It was somewhat cold and the wind made it a bit worse. We did all we could do to keep our little man warm.
While we waited, pictures were taken and Brady was entertained.
Let the festivities begin already! 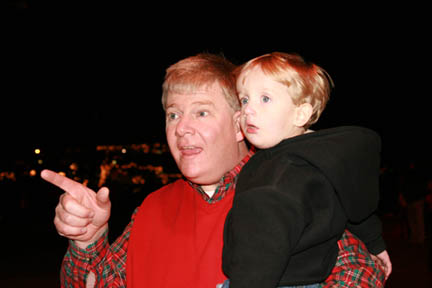 It was a traditional, small town parade. We saw firetrucks and high school bands. The beauty queens were perched on sports cars, with their signature wave.
We even saw horses, old timey cars and singing school kids riding on floats.
We felt the holiday spirit, indeed.

The ending was a bit lame, however. Santa and Mrs. Claus did not bring the Christmas parade to an end riding high up on a big, red sleigh.
Instead, we saw the famous Christmas couple in a small, dinky little train.
Oh well.

After the parade had ended, we were too excited to go home. We decided to ride around town again and look at more Christmas lights.
Our little man could be heard in the back seat exclaiming, "Wow!"
The next thing we knew, Brady was sound asleep. So we headed home.

Mom, once again, you were right. Kids make Christmas special.