The following guest post is is by Ethan Nobles of The Natural State Hawg:

Yes, indeed! The fighting Benton Panthers won their first game of the season tonight, improving their record to 1-2 before going into conference play in the 6A-South.

There are few things I enjoy more than high school football on Friday nights. My father and I are both Benton High School Alums, so we try to catch every Panthers home game. It'll be a rough year for central Arkansas' scrappiest ball club, but at least the Panthers chalked up a win tonight by beating the Conway Wampus Cats 15-14 in a bit of a nail biter.

It was great being in C.W. Lewis Stadium here in scenic Benton for that victory, but the best thing about the evening was having the pleasure of meeting two fellow Bloggers -- Paul and Laura Eilers. Paul runs PaulEilers.com and Laura runs Junk-Foodaholic. If you haven't visited those two sites, you really should. 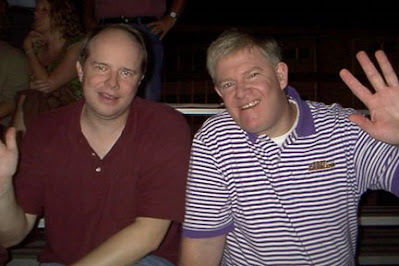 Oh, I went ahead and posted a picture that Laura took of Paul and me (I'm the one on the left, proudly wearing Panthers maroon). Thanks for sending that photo along, folks!

Dad and I agreed that their presence at the game made it that much enjoyable as they are both wonderful, friendly people who make an already fun outing even better. Why were the Eilers there? Their son, Dylan, plays for the Wampus Cats, so they journeyed down from Conway to watch the fun.

The only thing that's too bad here is that the mighty, fighting Panthers defeated Dylan's team. However, Benton doesn't look that solid this year, so I'll cherish any victory that's available.

I also decided to quit being lazy about a question I've had for years - what is a wampus cat? In the past, I've been told it's a magical, six-legged cat and I've left it at that. I checked on Wikipedia, however, and found a more detailed explanation right here. Fascinating stuff, and I found out that no fewer than seven high schools in the U.S. have chosen the unusual wampus cat as a mascot.

But, back to the significance of tonight's game. Conway is in a higher high school athletics classification at 7A than Benton is at 6A. Benton's taken a whipping at the hands of two 7A schools this year, so the lads have some hope before they enter the regular season -- they've beaten one 7A team, so the hope is that will do wonders for their confidence when they're battling it out against peers in the 6A-South.

An alarming thing about the game, however, is that Benton has a tendency to fumble and get penalties for stupid stuff at the absolute worst times. Also, the team still has a tendency to fade in the second half and has a miserable kicking game. Things, apparently, haven't changed that much from last season.

Regardless, tonight's victory over Conway gives the team and its loyal fans a reason to celebrate and view the start of the regular season with optimism. That's nothing but good.

Anyone who is wondering why I, The Hawg, would bother with a high school football game has obviously spent very little time in the South. Towns in these parts rally behind their high school teams and treat games as a major social event.

In my case, I get to hang out with my father, get to visit with old friends on occasion and meet new ones like the Eilers. My hometown boasts a population of just 27,000 people, so Friday night football is a huge deal to a small city like this one that doesn't have any pro or college sports at all. The encouraging thing is that fans still turn out even if the Panthers stink -- most of us graduated from high school here and still turn out to support our local kids.

That's nothing but good, right?