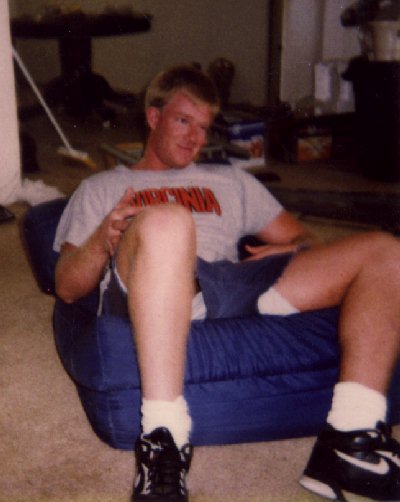 While I was in college, my grandfather was diagnosed with lung cancer. He wanted to spend his last days at home, so my mother took care of him along with help from Hospice. I came home on weekends as often as I could to help out. Eight months later, he died.

A few years later, a friend of mine who was a high school math teacher and baseball coach, died of leukemia. He was just thirty-two years old and left behind a wife who was eight months pregnant at the time.

Not too long after that, my fifty-nine year-old father was diagnosed with emphysema and hooked up to an oxygen machine. Seven years have passed and during that time, he has had a small heart attack, developed diabetes, and now has pancreatic and prostate cancer. His doctors told him to try and enjoy what time he has left.
After seeing what happened to my grandfather, my friend and my Dad, I decided I didn't want to end up like that.

I have a friend who is now eighty-five years-old. When she was seventy-five, Mrs. Gravely had several degenerative diseases that accompany advanced years. She had osteoporosis, hypothyroidism, fibrocystic breast disease and arthritis. She also needed Depends, due to lost bladder control. Since her muscles cramped at night, she had trouble sleeping.
Her health was so bad that her four adult children considered getting a full-time nurse.

Then one day a friend from New Orleans educated her about nutrition and Mrs. Gravely decided to take charge of her own health. After changing her diet and adding whole-food nutrition to her daily routine, Janice Gravely turned her health around - and never did get that nurse.

But what about you?
Good health is something that we all want, yet so few of us give it serious thought until we get sick. That approach does not work.
I've been studying all that I can about health and nutrition for the past several years.
I now want to share what I've learned with you.