"They said after the surgery I wouldn't be able to walk, talk or eliminate, but I fooled them." 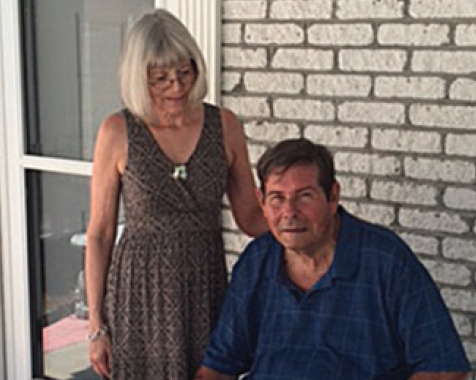 Wesley Sanderson was told his feeding tube was permanent.

His wife, Linda Sanderson, decided to feed her husband the Garden Trio through his tube. The gastroenterologist supported her decision.

"We aren't saying anything is permanent until the Big Man has his say," she said.

She kept pouring in the Garden Trio every day.

"I've been drinking the Garden Trio for a long time," Wesley said.

"It works. I've had three aneurysms. They said after the surgery I wouldn't be able to walk, talk or eliminate, but I fooled them. My doctor told me nutrition was the best thing I could do. 'I can't get any of my patients to do that [nutrition]. The stuff you're putting into the food tube, that's the stuff getting you out of that nursing home.' "

Says Linda, "I thank AIM for what it has done for us. It's just a miracle."
P.S. Since 1995, Linda has taken Herbal Fiberblend every night. She's sixty-nine years old and still teaches school, isn’t on prescription drugs and healthy.

Testimonials should not be construed as representing results everybody can achieve. The Garden Trio® is not intended to diagnose, treat, cure or prevent any disease. Results may vary per person.