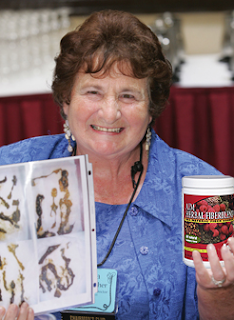 It was World War II. When allied planes began dropping bombs on her hometown of Naples, Italy, fourteen-year-old Teresa Schumacher grabbed the hand of one of her female friends and instinctively headed for the downstairs bathroom in the building where they were both working. The girls huddled together as the explosions continued all around them.

Everyone else in the building died during the raid. Somehow Teresa and the girl survived. For three days they remained buried in rubble; their only nourishment was water from the toilet tank. Eventually, rescuers dug them out from what was left of the bombed-out structure.

Seventy-two years later, Teresa recalled their miraculous survival as though God had a special purpose for her.

"I don't know what made me take the hand of that girl," she said with a characteristic modesty that is often a trait of those with a powerful desire to help others.

As a nutritional consultant and perhaps most notably, as the formulator of Herbal Fiberblend®, Teresa Schumacher has succeeded in carving out a lifelong path that allows her to reach out and help people along the way.

The path took her from Italy to the United States after she married an American soldier. The year was 1945 and in the land of opportunity, Teresa embarked on a number of successful careers that included selling brushes, insurance, ladies' undergarments, and health products. She and her husband started a family and over the years they raised five children: Toni, Patricia, Joseph, Eugene, and Michael.

It was after Teresa had her first child that she began to have severe colon problems.

"It was the change from a healthy Mediterranean diet to an American diet that caused it," she explained.

Even after a few corrective surgeries, Teresa still had severe constipation as her diet had not changed. Her health continued to get worse.

"There was a year when I could not even walk. It was so bad that I reached a point where I didn't care whether I lived or died."

Not knowing what else to do, her sister-in-law recommended that she go to see a French couple that provided therapeutic massage.

"They were hippies and we became friends," said Teresa. "They recommended changing my diet to include fiber from cereal, which I did until I developed Herbal Fiberblend."

Teresa began studying herbs and proper nutrition. Using fiber and herb combinations, she started helping other people who had digestive problems - some of which were caused by parasites. Word of mouth about her successes traveled around St. George, Utah, which had a population of about 10,000 at the time. She was soon selling thousands of dollars worth of her natural remedies every month.

Around the same time, Teresa was introduced to barley grass powder from The AIM Companies™. She began selling so much of the AIM flagship product that it came to the attention of the owners of the company, Ron Wright and Dennis Itami.

"Ron came to St. George and we had lunch together," explained Teresa. "After paying me, he left with six bags of my encapsulated herbs, which were part of my colon-cleanse program. That's how it all began."

After Teresa did test trials using AIM-packaged canisters of her formula and tracked successful results for nine months, The AIM Companies™ launched Herbal Fiberblend®, which continues to be a top-selling AIM product.

Seeing as how Teresa found help for her health problem by increasing her fiber intake, it seems fitting that she turned this experience into something that would reach out to a countless number of people all over the world.

"I feel that God has blessed me by letting me live through everything that I have experienced," said Teresa, "You never really appreciate what other people go through until you have been through difficulties of your own."

The financial success with The AIM Companies has created a legacy for her family. Toni Lund, her eldest daughter, plays a major role in the family business, including the computer end of things. The other children of Teresa are all AIM Members who regularly use the AIM products.

Teresa's strong work ethic, which she got from her own mother, does not allow much time for her hobbies, such as playing the organ or oil and water painting. On top of being active in the AIM family business, Teresa teaches nutritional courses at Dixie State University.

Even though she has been advised to slow down and not work so hard, Teresa offers her own advice: "Try to stay healthy so you can keep helping people."

And helping people is the business of Teresa Schumacher.

P.S. Herbal Fiberblend® is for people who believe nutrition matters and makes a difference in their health. Does that sound like you?

Note: Testimonials should not be construed as representing results everybody can achieve. Herbal Fiberblend® is not intended to diagnose, treat, cure or prevent any disease. Results may vary per person.