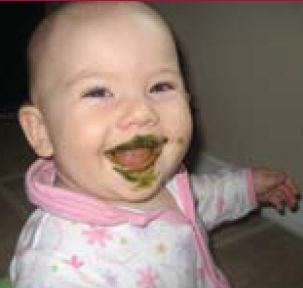 "I've been faithfully taking AIM's barley grass product since I was seven years old. I'm now twenty-nine years of age and have a beautiful little girl of my own, Ana Leigh.

I want to share her story because I find it particularly unusual. Ana loves BarleyLife Xtra, but hates bananas, peaches, plums, yummy yogurt and pretty much anything else I offer her.

I have to fight her to get her to take just a couple of bites of 'normal food', but when she sees the spoon of BarleyLife Xtra, she opens up wide and makes funny 'mm hmm' noises like it's the best taste in the world.

I usually give it to her in a paste of about half a teaspoon, with just enough water to make it moist. I have been giving it to her since she was four months old.

I have to add that she has been very healthy. Before I had Ana, on many occasions I offered some of my "mom" friends BarleyLife Xtra as an easy way to get their children to eat some veggies. Many of them decided that their kids wouldn't take it before they even tried.

Now that I'm a mom, my suggestion is that they just might love it!

Parents can be creative in getting kids to use BarleyLife Xtra.

For example, my husband Chris and I were missionaries in Africa for a year, working at an orphanage. We were able to get all of the boys at the orphanage taking BarleyLife, even though they hated to eat veggies.

I told them it would make their muscles big and strong. They all wanted it and then wanted to show us their strong muscles!" - Rebekah Ford, Deltona, Florida