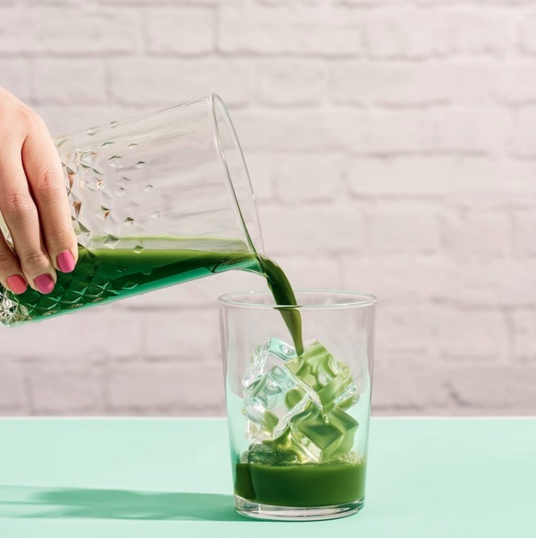 "I told Ron about my best friend in high school with a throat cancer diagnosis. Ron suggested he take BarleyLife, holding it in his mouth to dissolve.

Surgery was going to be performed just prior to Christmas, but he did not want to miss the holidays in the hospital, so he postponed the surgery until this week.

Meantime, I convinced him to take BarleyLife and Herbal Fiberblend. I gifted him some and he began taking them December 8th.

He went in earlier this week for his pre-surgery tests and the surgeons told him his throat has cleared and the one remaining nodule is benign. They are calling it a miracle.

My friend did not tell them what he has been taking, but he has another appointment next week to stretch out the tissue in the throat that became enlarged with the inflammation. He plans to take in an empty can of BarleyLife to show the surgeon.

He had been taking three kinds of pills for his throat, but nothing worked.

Anyway, he called this morning with the good news that he received late Wednesday. He believes I saved his life, but of course I only pointed him to AIM. It was our products.

One other thing. He is a commercial pilot and has an annual physical. He takes blood pressure medicine due to high blood pressure. When he went in for his pre-surgery visit, the nurse told him his blood pressure was perfect, not high as it has been for years.

He is so excited to have his health back and I'm thrilled for him. I would not have been able to help him had I not gone to work for AIM. - Rick Coffman, Nampa, Idaho

"I had the most exciting phone call yesterday from an AIM Member who lives about an hour away. He is a former hospital administrator engineer and is now an international speaker. He thanks God and the AIM products for restoring his life after two bouts with cancer.

One was as recently as last February. He had been doing a lot of traveling, not eating correctly and so busy at times that he was neglecting taking his BarleyLife.

Well, in February, he looked like he was dying and he was. His doctor confirmed that his leukemia was back something he had recovered from four years ago with AIM’s BarleyLife.

His Canadian health care system said that they wouldn't be able to give him treatment until this coming November, next month. His wife, who is a registered nurse, knew he wouldn't survive until then.

He started taking a bottle of BarleyLife every two days (about thirteen teaspoons per day). I've never heard of anyone taking that much. But, from last February until April, his body got what it needed to rebuild and restore.

He is now a picture of health, traveling internationally in the mission field and telling everyone about BarleyLife." - Sandy Combs, DeBary, Florida

In April of 2008, I started having abdominal pain. Initially thought it was due to lifting heavy objects. By the end of May, I went to see a doctor as something was wrong.

By July, I had blood clots and intense pain and the doctors suspected cancer, but couldn't find it. Otherwise, I was feeling great while taking BarleyLife and carrot juice. Clotting was so severe they couldn’t do exploratory surgery. By October had been in an out of the hospital numerous times, on a morphine patch and nothing was working.

Finally, they put a filter in a major artery to prevent clots from getting to the heart so they could do surgery. In surgery they found peritoneal cancer (a rare cancer of the tissue that lines the abdominal wall and covers organs in the abdomen), a tumor that was attached to all organs. Told me I had a couple months using alternative methods or maybe two years with chemotherapy.

However due to my supplementation and improved diet I was feeling great other than the pain. I decided to work on overcoming this through spirit, soul and body. Started meditating on the Lord's Prayer, improved attitude deciding to be positive and beat this thing, improved diet (no junk, fresh whole foods), supplemented with AIM products (BarleyLife, Just Carrots, RediBeets, Herbal FiberBlend, AIMega) and exercised.

Asked doctor for time to try alternatives, doctor said he saw what was in me and said I needed chemo. I was feeling so wonderful, otherwise, that I asked to wait until January before starting chemo so I could do my alternatives and give them more time to work.

In January I had all the tests run. The next day all the tests came back normal, there was no cancer on the pet scan at all. The doctor was shocked and asked to know exactly what I had done. It is now September of 2009 and I'm still cancer free.

It's important to note that I continue to supplement with good amounts of the AIM products to help my body stay strong so this doesn't return." - Cindy Ponchot, Lebanon, Ohio
P.S. BarleyLife is for people who believe nutrition matters.
They want to do everything they can to avoid being sick as they get older.
Does that sound like you?
To learn more about BarleyLife, Click Here.