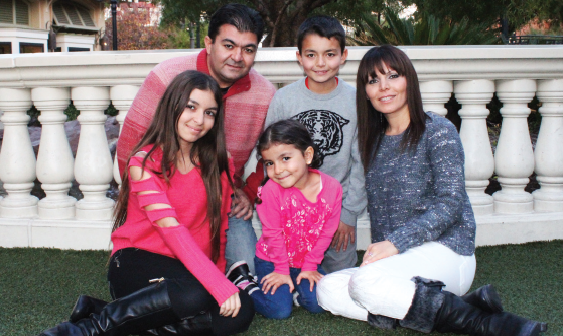 Back in 1997, Liana Kopalyan thought she was headed for a career as an attorney. With a B.A. in hand, law school was the next step. After marrying Nerses Kopalyan, she decided to take a year off before continuing her studies.

During her time off, she found a small cyst after performing a breast self-exam. Her doctor recommended the benign, tumorous mass be surgically removed. Within less than a year, it grew back.

Her grandmother had died from breast cancer, so Liana felt there was a high possibility the same thing could happen to her.

"I remember praying to God to show me what was wrong with my body," Liana said.

The next day she received a telephone call from her friend Alice Muradyan, about a seminar in Mission Viejo, California, being conducted by Mary-Ann Shearer.

"I was crying the entire time during the seminar," she admitted.

Mary-Ann put her on a lifestyle-changing program, assuring Liana that within a month her body would repair itself and the cyst would melt away.

"I bought everything Mary-Ann was selling, stocking up on BarleyLife, and then reading her books and doing research," Liana said.

"Deciding to do everything new, I trashed all of the bad food in my kitchen and went shopping at Whole Foods."

Having decided to be one hundred percent committed to the recommended lifestyle changes, it took only two weeks for her body to heal.

To make sure the cyst was no longer there, she went back to the same doctor, who was now confused about whether it was the right or left breast, because the cyst was gone.

"It's not difficult to comprehend. My body healed itself with nutrition like BarleyLife," Liana stated. "I constantly take it!"

The journey to becoming an attorney reached a fork in the road at this point in Liana’s life. Instead of going to law school, she took a two-year course to become a natural health consultant.

Liana explained, "I got serious about good health for my family."

Since 2010, Liana has been using her own workbook, 7 Keys to Vibrant Health, which makes it easy to understand and implement the lifestyle changes required to achieve and maintain wellness.

Supplementing with AIM nutrition is one of the keys.

"I teach people that with the correct nutrition, the body can heal itself," Liana said.

"As a general rule, I recommend the Daily Essentials – BarleyLife for greens, AIMega for omega-3 and -6 essential fatty acids, and Herbal Fiberblend for fiber and cleansing herbs. During the winter months, the Garden Trio is a must."

Thousands of people have gone through Liana’s Natural Living program, and most arrived with health issues that ranged from the common cold, the flu, and weight management to life-threatening problems, including high cholesterol, depression, cancer, diabetes, and heart disease.

By practicing the lessons learned, thousands have had incredible success, such as Gil Quintana, who was able to reverse a type 2 diabetes diagnosis and went on to become a part of Liana’s team.

"I have amazing team members with incredible testimonials," Liana acknowledged, "including a woman who was able to heal from uterine cancer. Without chemotherapy, radiation, or surgery, three tumors disappeared within six months. She healed the natural way."

Her original intent to keep her family in good health has also come to pass. Liana and her husband, Nerses, who is a full-time pastor of the Armenian Church of Las Vegas have two daughters, Ovsanna and Loyda, and a son, Samuel. All three children take AIM products.

Liana is currently working out of a wellness center in Las Vegas and in the process of opening her own nutrition center. Her vision is to provide one hundred percent natural products and services for clients and students local and abroad.

Looking back on what Liana feels is a divine connection that led her on this journey, she acknowledged, "I'm grateful to Mary-Ann Shearer for restoring my health. Over the years she has been my teacher, professor, role model, and now an amazing mentor."