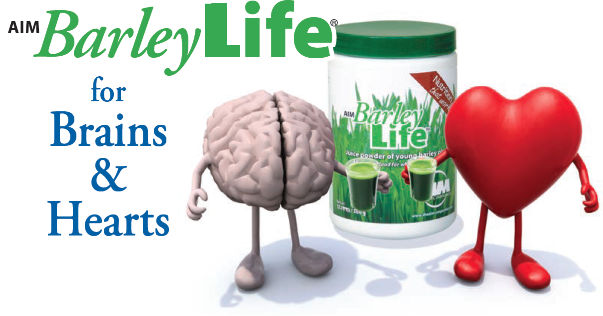 A recent study found people tended to identify the “seat of their selves” as either residing in their hearts or their brains.

What’s most striking about these findings is the two organs associated with self-identity are the same ones that are most affected by the ravages of the aging process.

As we get older, arteries may harden, and our brains can undergo a slow, age-related decline. To say this is a frightening prospect is an understatement.

The good news is there is BarleyLife®. It’s chock-full of vitamins and minerals that benefit both your heart and brain.

For example, the Federation of American Societies for Experimental Biology looked at nearly 1,000 adults and their eating habits for over a decade. The reasearchers found test subjects who ate one or two servings of leafy green vegetables per day had the mental faculties of someone a decade younger, than those who consumed none.

The researchers accredit these health benefits to the vitamin K, lutein, folate and beta-carotene content found in leafy green vegetables. While most of these nutrients have been linked to cognitive health before, this is the first study in history that looked for both and found a link between vitamin K and brain health.

BarleyLife® contains 10% of your daily folate needs and 100% of vitamin K.

As far as heart health goes, a study published in April 2015 in the Journal of Clinical Nutrition examined the mortality rates of chronic kidney disease (CKD) sufferers. The most common cause of death for people with CKD is cardiovascular disease, due to increased arterial calcification.

By analyzing data in the National Health and Nutrition Examination Survey, scientists were able to determine that those CKD patients who consumed adequate amounts of vitamin K were less likely to die and significantly less likely to die from cardiovascular disease. Previous studies have also linked vitamin K to a reduction in arterial calcification.

It doesn’t matter whether you identify with your heart or your brain, drinking BarleyLife® is a boon to both. It’s a smart decision that will leave you feeling good.

Folate consumption has been linked to lower homocysteine levels, a factor in determining the risk of cardiovascular disease and Alzheimer’s.

Low folate levels have also been linked to depression.