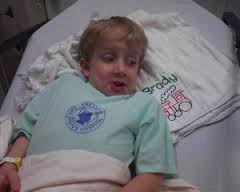 On Valentine’s Day 2011, our son had part of his adenoids removed and tubes put in his ears. He needed the surgery due to fluid build up.

The doctors prepared us by saying Brady would be sore for the next few days. They also said to expect swelling, bad breath, a fever, and nose bleeding.

We were told to expect a week for things to return to normal.

So you can imagine our delight when Brady started feeling well while in the hospital recovery room. He kept saying over and over he was ready to go home. He didn’t even take any pain medication!

After we returned home, Brady acted like nothing had happened. He played with his toys and ran around the house. We waited for him to complain or get tired, but he never did.

None of the symptoms we were cautioned about ever appeared.

The next day, Brady wanted to go to school. We were hesitant, but the doctor said it was okay. The shocked school nurse said she had never seen that before.

After talking it over, my wife and I concluded the quick recovery by our son was due to BarleyLife® Xtra.

The body needs high-quality nutrition to do its work. BarleyLife® Xtra is made from high-quality foods. Brady certainly is healthy.

What else could it be?

P.S. BarleyLife® Xtra combines eighteen fruits and vegetables with young barley grass, which researchers have found to be one of the most nutritious plants on earth.

Why not see how this nutrient-dense green powder works for you and your family?