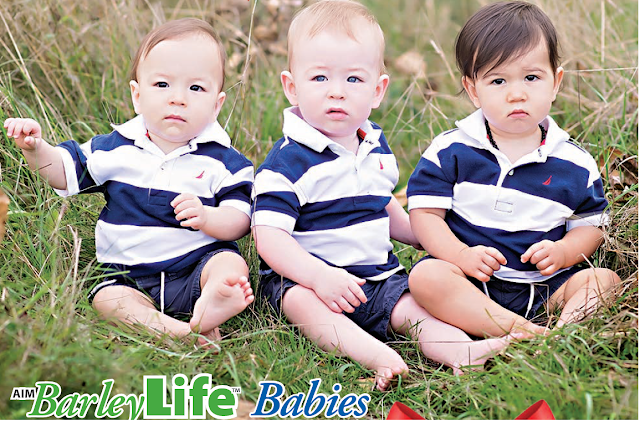 For Ken and Lanny Donald, becoming grandparents carried a triple twist of fate.

In the space of less than a week, Ken and Lanny suddenly had three grandkids. This welcome trio of boys has blessed the lives of the Donalds, their extended family and friends.

Both Kalina and Jensina have taken AIM products for years, and during their pregnancies, they primarily took BarleyLife and LeafGreens to boost their energy levels and maintain a healthy nutritional intake.

Shortly after giving birth, Kalina received some guidance from Kathleen Bird-Ekman, an AIM Member who is also a nutritional consultant, as to when she could give BarleyLife to her twins.

Kathleen's seven-year old son, Robert, and three-year-old daughter, Alexandra, have enjoyed AIM greens from the time they were about six months old and both children are incredibly healthy.

The Donald's preferred method of using BarleyLife has always been to take the powder dry.

"I found that when I tried to give my boys BarleyLife on a spoon, their breath blew most of the powder away," Kalina stated, realizing it was time for a different method.

"I noticed that when the canister was left open and there was humidity in the air, the powder would form into little clumps. I decided to mist water on some of the powder and roll it into little balls. Voila! BarleyLife candy."

This became the ideal delivery method for all three of Ken and Lanny's grandchildren.

"Kaius goes wild when you walk toward him with a BarleyLife canister," Jensina stated. "And Kaius, Kaelan and Keiran all love it."

In fact, both moms relate that thirty minutes before milk time, their children's facial expressions signal they're clamoring for BarleyLife. They suck on these healthy BarleyLife balls and end up with greenish-black lips and faces.

But it keeps the boys healthy, and they rarely get sick.

Recently, Kalina and Jensina have been giving the boys the Garden Trio to increase their nutritional intake. And both moms have upped their own AIM intakes for very good reasons.

"Because they are actively moving around now, we're more exhausted now than when they were newborns," Jensina admitted.

"We'd be dead in the water without AIM products."

P.S. BarleyLife Xtra is for parents who believe nutrition matters. They want to do everything they can to make sure their kids are getting the right nutrition every day.

Click Here to find out more about BarleyLife Xtra.