Nutrition For The Long-Haul: Truck Driving and AIM 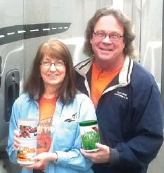 For Jack and Eloise Murtaugh, from Bel Air, Maryland, the open road is more than a calling. It is a profession.

The couple has been driving semi-trucks for Schneider National - the company with the ubiquitous orange trucks and trailers - for the past six-and-a-half years.
The trucking lifestyle does not exactly lend itself to good nutrition and healthy eating, but the Murtaughs have found a way: BarleyLife.

"We're out three or four weeks at a time," Eloise said. "Really, it's eat, drive and sleep. BarleyLife is something where I know I've got some green nutrition to add to the food I'm going to be eating for the day."

The Murtaughs spend as little as five or six days at home each month. The rest of their time is on the road and in their truck. The majority of their meals are made in the truck and healthy food options are hard to come by, due to lack of refrigeration, time and space.

For this reason, BarleyLife has been a lifesaver.

"Ninety percent of the food we eat, we cook here in the truck," Eloise said. "It's so hard out here to eat as much as you can of your fruits and vegetables. BarleyLife has become something that helps sustain our health. The first thing I do when I wake up for my shift is have my green drink."

Jack and Eloise take alternating, twelve-hour shifts driving the truck (longer shifts are not allowed by law). While one drives, the other sleeps. Eloise had the day shift for the first four years, "so I've seen everything," she said. (Jack now drives during the day, Eloise at night.)

AIM nutritional supplements have been a part of their routine since 2011, when the Murtaughs joined as members. The boost of whole-food nutrition has been a welcome addition to their diet. Both Jack and Eloise take The Garden Trio. Jack adds Peak Endurance and has noticed an improvement in his energy levels.

The Murtaughs went without AIM nutrition for the first five years on the road, until Eloise met Jim and Carolyn Kling, while on a trip to Nampa. Eloise was visiting family with her aunt, Marge Fuhrmann, 86, who has been taking BarleyLife for twenty years.

"My brother, who lives in Nampa, sings in the same choir as the Klings," Eloise said. "My brother knew the Klings were the BarleyLife people and my aunt has been ordering her BarleyLife from AIM for all these years.
He said, 'I have to take you and Aunt Marge to meet the Klings.' Oh my, we had such a nice time! We got to talking about BarleyLife - something I had heard about thirty years ago. I thought, 'I need this stuff now.' "

Ever since, a necessary part of the Murtaughs' driving has been AIM nutrition.