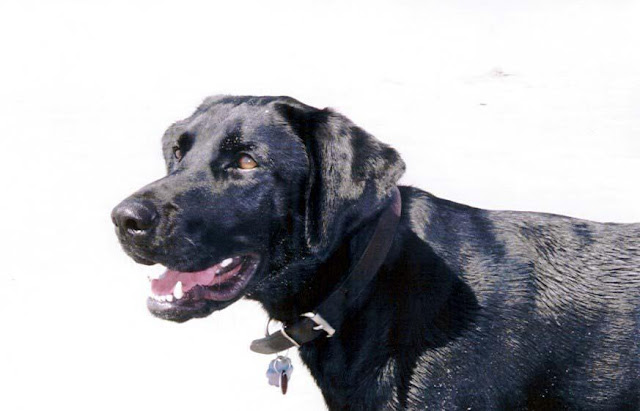 The following is something I wrote a few years ago about our beloved dog, Clarence:

When I was growing up, our house was situated on a corner lot, with the backyard consisting of a concrete driveway, a basketball goal and a garage.
There was a deck on the side of the house and a nice front lawn, but no backyard.
Consequently, my brother and I never had a dog.

After my wife and I were married, we bought a house with a large fenced-in backyard. Laura and I began to talk about getting a dog for our son, Dylan.

I had always known Labrador Retrievers made good pets. When I was growing up, several of my friends had Labs. Labradors are people-oriented and great with kids.

In June of 2005, we were driving through a subdivision in town. We spotted a SUV in a driveway with a magnetic sign on the door. It was an advertisement for a Labrador Retriever breeder and trainer.
We decided to stop and talk to the two men who were standing outside.

The owner of the dog training business said he only trained Labs for hunting and dog shows. He did, however, have a six month-old black Lab whose temperament would not make a good hunting dog. He believed, though, the dog would make a great pet.

Three days later, the trainer brought the puppy to our house. He told us his name was Clarence. If for any reason we we didn't want to keep him, he would take him back. We instantly fell in love with Clarence and have had him ever since!

We take Clarence for walks in our neighborhood. When we ride bikes at the nearby park, he likes to run with us.
However, the number one thing Clarence loves to do is to go bye-bye with the family! His ears perk up when he hears the car keys jingle and he'll trot to the front door as if to say, "I'm ready to go!"
Because a trained dog is a free dog, we allow him to go just about anywhere with us.

I've always believed a boy should grow up with a dog. They can run off and explore the world together.
A boy can tell his secrets to his dog and never fear he'll be betrayed. Getting Clarence was one of the best things we have ever done.

Clarence, if all dogs indeed go to heaven, then I can hardly wait to see you again on the other side. I love you and miss our long walks together already.