She Is One Hundred Years Young 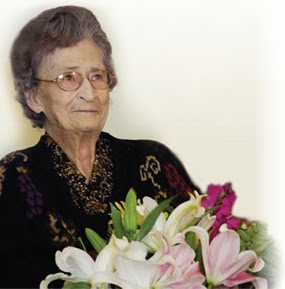 Those three elements have sustained Edna through a century of living. Thanks to those three things, Edna shows no signs of stopping.

"Don’t park in the handicap spot," Edna will tell friend Mary Hale as she drives her around town. "Leave that for someone who really needs it."

For the past twenty-five years, Edna has not needed it. Her remarkable story stands out as an example for others to hope for.

Edna goes to the doctor only twice a year for routine checkups.
She has been out and about two to three times each week for the past twenty-five years. She is an active member of her local church where she always wins the award for "oldest member" and has received dozens of standing ovations every time she reaches another birthday.

And she takes BarleyLife every morning straight from the jar. She likes the taste.

"Take BarleyLife and you will get standing ovations when you turn ninety and one hundred," Edna says.

During the 1970s, Edna suffered from severe arthritis. Her doctor advised her to travel around the country to different states to see if a new location would reduce her discomfort. She was told to wake up in the morning and see if she could walk without pain; if she could, the doctor recommended she move to that state.

Edna tried several different places, but when she arrived at Roswell, the difference was immediate. She woke up in the morning at Roswell and thought, "I could run!"

She moved to Roswell in 1977 from her home in Iowa. Nine years later, in 1986, Edna got her start with The AIM Companies.
A friend took Edna to a home meeting, featuring two doctors speaking about nutrition. Edna was interested in attending because she had a daughter who was suffering from cancer. She wanted to see if this nutrition information could help.

The meeting was hosted by Members Pat Copple, who lives in Roswell, and Opal Wright, another Member of The AIM Companies.

BarleyLife has added so much to Edna's life over the years. She is giving back by setting a great example in her church and community of how nutrition and lifestyle play a big part in longevity and health.

Many of her close friends take BarleyLife. Her friend, Mary, the pastor's wife, is interested in getting started on AIM nutritional supplements to help with arthritis. Mary has plans to introduce the whole church choir to products from The AIM Companies.

At a hundred years old, Edna Ree is proof of the power of proper nutrition to extend lives and improve health. When people ask Edna how she has managed to live so long, her answer is simple: "Take BarleyLife."

As Edna has proven for the past two decades, it's hard to argue with the results.