"I've been cancer-free for two years and I just had my tenth clean MRI." 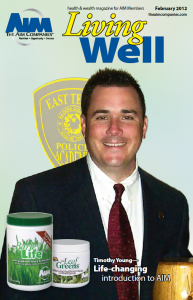 On February 9, 2010, Timothy Young left the police academy in Kilgore, Texas, where he had worked as an instructor for eleven years.

Shortly after arriving at the home of his parents, he collapsed on the floor of the kitchen and had to be rushed to the hospital.

The doctors discovered a glioblastomamultiforme (GBM) - a brain tumor that grows aggressively and spreads quickly.
The grade 4 tumor, which is the worst kind, measured 5.8 x 5 x 4.3 centimeters (2.3 x 2 x 1.7 inches), which is slightly larger than a golf ball.

Since the local hospital was unable to handle such a life-threatening condition, Timothy was transferred to MD Anderson Cancer Center, a world-renowned cancer center in Houston, Texas.

Up until the very moment that he was told that he had a cancerous tumor growing inside his brain, Timothy had been in good health through his thirty-eight years.

Born in Dallas, Texas, he survived childhood without ever having the chicken pox, stitches, or a broken bone. With no warning signs or symptoms, Timothy suddenly found himself with the prospect of having only six to twelve months to live.

"I felt nervous," he admitted, "about the unknown."

His seventy-two-year-old father, Larry, and his sixty-six-year-old mother, Linda, have no family history of cancer, although the risk factors for GBM tumors rarely include a genetic predisposition.

However, the alterations of the genes that control cell division and growth are the primary cause of brain tumors.
Even though the reason for gene alteration is poorly understood, the result is well-documented - the abnormal, unregulated growth of cells.
At the same time, this type of cancer is more common in men over fifty years of age.

Thirteen days after collapsing at the home of his parents, Timothy underwent a seven-hour craniotomy to have the cancerous mass surgically removed.
Follow-up treatment included six weeks of radiation and two hundred and ten days of chemotherapy from Temodar (temozolomide) capsules.

"But it's impossible to kill every single cancer cell," added Timothy.

A life-changing introduction also came out of his time at the MD Anderson Cancer Center.

"I was told about the importance of nutrition," Timothy explained, "and I can't remember who it was, but someone talked about a wonderful food supplement from a company called AIM."

After doing some research, Timothy contacted The AIM Companies and spoke with Judy Clover, AIM Customer Service Specialist.
He became an AIM Member and started taking BarleyLife and LeafGreens in capsules.
This combination of nutrient-rich greens can help to alkalinize body pH, which combats inflammation - a major cause of disease.

"I found out that a key supplement for what I had is garlic," Timothy added, "so I also started ordering GarlicAIM."

With the importance of nutrition for good health in mind, Timothy also began looking at his eating habits.

"I'd been eating too much red meat, which is acidic and causes inflammation," he said. "I learned at MD Anderson that it is better to have an anti-inflammatory diet, so I switched to a more Mediterranean-style diet - more fish than meat."

For years, Timothy had been enjoying from four to six twelve-ounce cans of Dr. Pepper® soda every day.

"I found out that cancer feeds off of sugar, so I began knocking out any food and drink with added sugar," Timothy said, "but I'm okay with the natural sugar you get from eating foods such as oranges."

As of February 2012, Timothy has lived a year beyond the predicted twelve months. He is aiming for more.

"My goal is to be the guy that they study because they can't understand why he outlived their statistics. I've been cancer-free for two years and I just had my tenth clean MRI," exclaimed Timothy.
"It's like the line from the movie Rocky: 'Every once in a while a person comes along who defies the odds.' "

In fact, his neuro-oncologist calls him "a miraculous little elephant."

Timothy feels this entire experience has only made him tougher.

"It is very simple. You go from left-side paralysis, to a wheel chair, to a walker, to a cane, to walking, to running, to golfing, to hunting, to fishing, and back to teaching full time at the police academy," Timothy explained, as though it had been an easy journey.
"I have to say thank you, Lord, for your healing power, and thank you, AIM, for your awesome products that have helped me through such a trying time."

Testimonials should not be construed as representing results everybody can achieve. BarleyLife® and GarlicAIM® as well as other AIM nutrition are not intended to diagnose, treat, cure or prevent any disease. Results may vary per person.