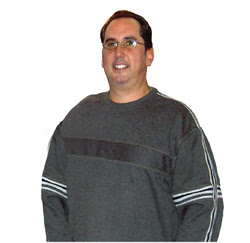 Some events, often tragic, are just too riveting to ever forget. Pearl Harbor. The assassination of John F. Kennedy. Man landing on the moon. We all have our moments in time that will stick with us forever.

And there is September 11th, 2001. The terrorist attack on the World Trade Center, the Pentagon and a thwarted attack to another target in Washington, D.C., resulting in a crashed airplane in Pennsylvania. When it was over, there were 3,017 dead, more than 6,000 injured.

Michael Golden, from Bayside, New York, was one of the countless thousands who showed up at the World Trade Center devastation to help with clean-up and rescue. His work began that first night and continued for two more weeks. He wore a mask and was covered head-to-toe in a protective suit. He only removed them to drive his truck away from the site. He figured he was safe from all the debris.

"One year later," recalls Michael, "I developed permanent damage to my sinuses and throat. I was told surgery was not an option. Ear, nose and throat specialists concluded that my problems were related to the clean-up. I was constantly on antibiotics, nasal sprays, steroids and heartburn liquid to cool down the violent burning. Tests revealed two different kinds of infection."

He experienced a merry-go-round of problems. He received varying results and occasional relief from doctor visits, but no cure.

Then in 2005, he and his wife met Dr. Yu-Shiaw Chen, a biochemist and certified nutritionist, who is also a member of The AIM Companies. He enrolled in her ten week "Healthy Weight for Life" course.

"While I was learning about nutrition from her," says Michael, "I started taking Herbal Fiberblend twice daily and the Garden Trio (Just Carrots, RediBeets, BarleyLife) with an extra scoop of BarleyLife. I keep my body detoxified and I have not needed to see any doctors."

Dr. Chen recognized that when Michael came to her, he was treating the symptoms, not the cause of them.

"The Herbal Fiberblend is not only a powerful colon cleanser, but it also cleansed and removed the toxin buildup around his sinuses, nose and throat. The Garden Trio provided his body with a daily intake of whole-food nutrition giving him vegetable juices, minerals, vitamins, live enzymes, antioxidants, phytochemicals and chlorophyll to heal Michael and help him feel better."

Dr. Chen says she is proud of Michael for sticking with her health regimen. He did not get better overnight, so he had to be patient and trusting of what Dr. Chen was telling him.

"Michael's healing took a long time," says Dr. Chen. "You can imagine the task of cleaning up the burned ash and debris from the twin towers of the World Trade Center, plus the fallout from the jet and what it all did to his system."

She adds, "As time goes by, I have more respect for Michael and his fellow workers. They stayed there to do their duty. They are the unsung heroes. Many of them will suffer damage for many years."

But one of them, she knows, is feeling a whole lot better today than from the fall of 2002 to 2005 when he met her. Michael Golden has a special place in her heart. He feels the same toward Dr. Chen, a lady "I thank and appreciate with my whole heart."

P.S. The Garden Trio and Herbal Fiberblend are for people who believe nutrition matters.
They believe concentrated nutrition makes a difference in their health.
Does that sound like you?

Testimonials should not be construed as representing results everybody can achieve. The Garden Trio® and Herbal Fiberblend® are not intended to diagnose, treat, cure or prevent any disease. Results may vary per person.