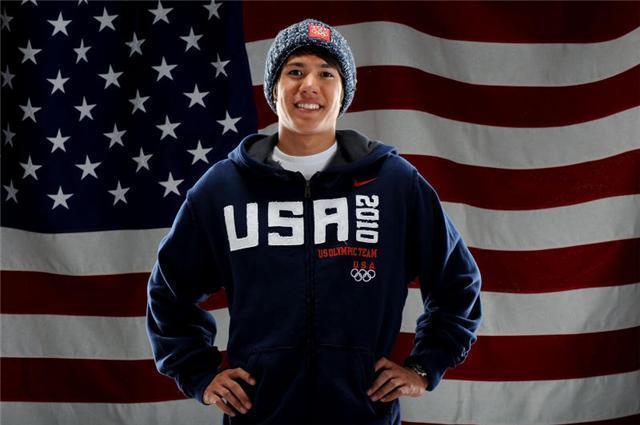 As one of the rising stars in short track speedskating, J.R. Celski skated to two bronze medals at the 2010 Winter Olymipcs in Vancouver, British Columbia, Canada. J.R. earned medals in the 1,500-meter race and the 5,000-meter team relay, showing no ill effects from a life-threatening injury only months earlier in the Olympic Trials.

J.R.'s story - one of determination, perseverance and hope - made the nineteen year-old's efforts all the more impressive and earned him respect and notoriety on Olympics telecasts and in media coverage. His Olympic success was magnified due to his young age and tough circumstances. He ended the three-week competition as the heir apparent to the U.S. speedskating throne, held by teammate Apolo Anton Ohno.

The continued health and success of J.R. Celski both on and off the ice include a mix of products from The AIM Companies - LeafGreens, Garden Trio, AIMega, Peak Endurance, CalciAIM, Cellsparc 360, Proanycnol 2000, PrepZymes and Herbal Fiberblend capsules.

In the first weekend of the Olympics, J.R. took to the ice in the 1,500-meter race - one of the premier events at the Winter Games and the strongest event Celski. He made it through the qualification rounds and into the finals. In the final race, he skated alongside Ohno and a trio of talented South Korean skaters.

During the race, J.R. kept his cool at the back of the pack for the majority of the race, biding his time until an opportunity presented itself. His opportunity came on the last lap when he and Ohno took advantage of a spill by two of the Korean skaters. Ohno and J.R., skating in fourth and fifth positions, watched as Lee Ho-Suk of South Korea crashed on the final turn, taking out Korean teammate Sung Si-Bak in the process. Ohno and J.R. skated past to capture silver and bronze, respectively.

Two weeks later, on the final night for speedskating, J.R. earned his second medal of the Games with a clutch performance in the 5,000-meter team relay. He and the three other American skaters found themselves in fourth place late in the race, trailing Canada, South Korea, and China. On the penultimate leg of the relay, J.R. literally pushed the U.S. team onto the medal stand, when he passed off to Ohno, shoving his teammate ahead of the third-place Chinese skater. Ohno maintained third place for the final two laps of the race.

J.R. also had a chance to medal in the 1,000-meter race, but he was disqualified in the semifinal round on a questionable call for interference with another skater.

The rise to the top of the speedskating world is remarkable, considering that he was still skating at the junior level only a year ago. In February 2009, J.R. made his first mark on the senior speedskating circuit by winning the 1,500-meter gold medal at World Cup VI in Dresden, Germany. The win was J.R.’s first at the world senior level, and it was the highlight of a 2008-2009 speedskating season that saw him excel at both the junior and senior levels, competing in the maximum number of races and logging over 600,000 air miles to meets across the world.

His storybook season continued at the U.S. Speedskating Olympic Trials in Marquette, Michigan, in September. At the trials, J.R. raced to the top of the overall points standings with a first place finish in the 1,500-meter event and strong showings in preliminary heats and competitions.

On the last day of the four-day competition, J.R. had his trials cut short after a hard crash into the wall during the semifinals of the 500-meter race. As he crashed, his right skate sliced across his left leg, just above the knee, opening a large, six-inch cut that required surgery to close and repair.

Despite the injury, J.R. finished second in the overall standings, thanks to his superb performance in his prior events. He had earned his place on the U.S. Olympic team, yet his availability for the Olympics was very much up in the air due to his leg injury.

Rushed straight to the hospital after his fall, Celski underwent successful surgery to close the wound, marking the first step on a long road back to the ice. Overseeing his recovery was former Olympian and five-time speedskating gold medalist Dr. Eric Heiden, who viewed the injury as merely a speed bump on the road to the Olympics. J.R. spent time recuperating in Salt Lake City before transferring to the Olympic Training Center in Colorado Springs, Colorado.

The AIM Companies, located in Nampa, Idaho, began sponsoring J.R. in 2002. Nutritional supplements from AIM were a key part to the training and nutrition regimen of J.R. Celski. Over the past seven years, the Celski’s have credited nutritional products from The AIM Companies™ with J.R.’s continued health and success both on and off the ice.

Nutrition has been a key part to the skating career of J.R. Celski, so it only made sense that it would be a key part to his recovery from injury. Immediately into the healing process, Celski boosted his daily dosages of AIM nutritional products. The added nutrition along with expert care and a strong will and determination saw J.R. tear through rehab faster than anyone had expected.

Only one month following the surgery, J.R. was able to bend his leg at a 90-degree angle. Doctors typically expect this benchmark to occur six weeks post-surgery. He bent the knee to 115 degrees soon after and he continued to improve right up to the Olympic Games.

Congratulations to J.R. Celski. He is a shining example of what you can achieve with perseverance, hard work and good nutrition.

This testimonial cannot be construed as representing results everybody can achieve. These products from The AIM Companies™ are not intended to diagnose, treat, cure, or prevent any disease.