The notion of consuming live bacteria may be a little hard for some people to swallow.

Traditionally, we are taught that bacteria cause disease and are therefore something to be avoided.

Lately, however, we are being told that certain kinds of bacteria are actually good for us. But exactly how do they benefit our health?

The word probiotic literally means "for life" - signifying its health promoting properties. Although many different definitions of a probiotic have been proposed, the most widely used, scientifically valid and therefore the accepted version is: "A live microbial food supplement that beneficially affects the host animal (that’s us) by improving its intestinal microbial balance."

In 2001, the Food and Agriculture Organization (FAO) of the United Nations defined probiotics as "live microorganisms which, when administered in adequate amounts, confer a health benefit on the host." For human adultuse, this includes fermented milk products as well as over-the-counter preparations that contain lyophilized (freeze-dried) bacteria. This means that a probiotic can either be a foodstuff like yoghurt or a supplement like FloraFood®. The microorganisms involved are usually lactic acid producers such as lactobacilliand bifidobacteria.

An effective probiotic is a source of "good bacteria" and should possess several important qualities. Firstly, it should exert a beneficial effect on the host, it should be non-pathogenic and non-toxic and it should contain a large number of viable cells. These should be capable of surviving and metabolizing in the gut and should remain viable during both storage and use. The product should have good sensory properties and, for best results, the bacteria should be isolated from the same species as its intended host.

Probiotics are often mentioned in conjunction with prebiotics, although many are actually unsure of the difference between the two. A prebiotic is a non-digestible food ingredient that beneficially affects the host by selectively stimulating the growth, activity or both of one or a limited number of bacterial species already resident in the colon. In other words, they are the non-digestible food ingredients that stimulate growth and activity of microorganisms in the gut. By acting as a food source, prebiotics give the probiotic bacteria a chance to exert their influence. So essentially, prebiotics are a food source for probiotics.

Prebiotics are sometimes known as fermentable fibre. Prebiotics are naturally found in many foods such as oats, whole grains and many fruits and vegetables including artichokes, asparagus, onions and bananas.

For a food ingredient to be classified as a prebiotic, it must also adhere to a few conditions. Firstly, it must neither be hydrolyzed (broken down) nor absorbed in the upper part of the gastrointestinal tract. Prebiotics must also be a selective substrate for one or a limited number of potentially beneficial commensal bacteria in the colon, thus stimulating the bacteriato grow and become metabolically activated. (Commensalism describes a relationship between two living organisms where one benefits and the other is not significantly harmed or helped.) Lastly, prebiotics must be able to alter the colonic microflora toward a healthier composition.

The Benefits of Probiotic Supplementation

The first and most important advantage of probiotic supplementation is the promotion of a healthy intestinal environment. The "good bacteria" compete with the "bad bacteria" for nutrients and actually create an unfavorable environment for the proliferation of these and other pathogens.

According to the Harvard Medical School, the best case for probiotic therapy has been in the treatment of diarrhea. Probiotics have also been found to be very useful in patients with Crohn's disease and irritable bowel syndrome (IBS). Probiotics can also aid in the digestive process by helping to digest lactose (milk sugar) and protein. They can therefore help to alleviate the symptoms of lactose malabsorption or intolerance - e.g. diarrhoea, cramps, gas etc.

Probiotics are also particularly useful during and after treatment with antibiotic medications.

Antibiotics don't discriminate - they kill the beneficial bacteria along with the bad kinds that make people sick. Upsetting the balance of good to bad bacteria can wreak havoc in the gastrointestinal tract by destroying good bacteria and allowing undesirable bacteria to multiply. When the ratio of good bacteria to bad is lowered, problems begin to arise such as excessive gas, bloating, constipation, intestinal toxicity and poor absorption of nutrients. Research supports the use of Lactobacillus acidophilus during antibiotic therapy.

Finally, friendly bacteria also assist in the manufacture of certain vitamins including vitamins K, B6, B12 and folic acid as well as assorted amino acids.

You may have noticed a slight change in the FloraFood label over the last couple of months. Previously, the supplement facts panel listed a proprietary blend of the following:

It now reads as follows:

We've recently changed the identity of one of the bacterial strains from Lactobacillus acidophilus to Lactobacillus gasseri. We are using the exact same strain that we always have in FloraFood®, but advances in genetic identity testing have revealed a more accurate description of these bacteria. Both strains share similar properties. Please keep in mind that this is the same Lactobacillus strain that has always been in our formula, but it has now simply been properly identified. 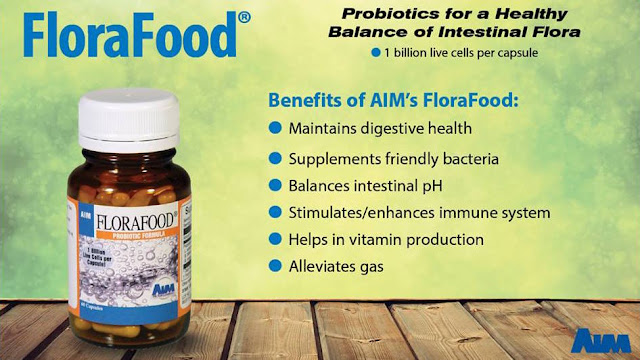