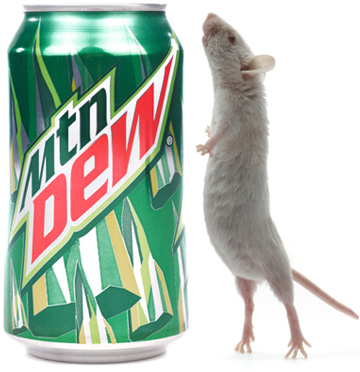 An Illinois man is suing Pepsi because he claims he found a mouse in his can of Mountain Dew. However, Pepsi says if there really were a mouse in a Mountain Dew can, it would have dissolved into "a jelly-like substance" before the guy could find it. Yup, this is their defense.

The company argues it has scientific evidence that the mouse was not in the can when the case was sealed in August 2008 and that a veterinary pathologist examined the mouse, finding that it could not have been in the can that long because its body would have disintegrated due to the acid in the soda.

Pepsi argues that for the mouse to have been in the Mountain Dew that long, the body would have transformed into a "'jelly-like' substance."