The following is written by my awesome wife, Laura. 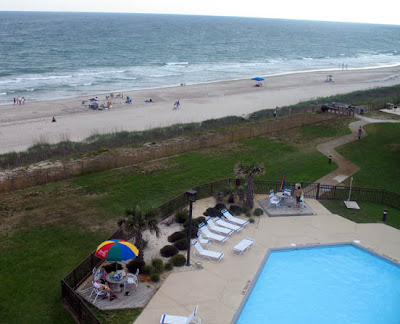 Summer Winds, Indian Beach, North Carolina
We had a wonderful vacation in eastern North Carolina, but it's always good to be home. Our little toddler, Brady was a trooper on the airplane. On the way to North Carolina, he was super-hyped up, which kept him from sleeping. But thank the Lord... he did sleep on both legs of the flight back home. 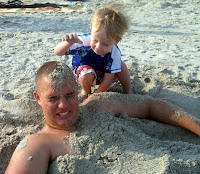 Running around after Brady kept me from being able to lay out by the pool or on the beach (insert lots of sympathy here). Brady had a blast playing on the beach the first day. But after he gulped down some salt water, he decided to stay out of that salty-wet-stuff altogether! The thing Brady enjoyed most about the beach was burying his big brother, Dylan, in the sand.

Brady didn't think much of the swimming pool either. Every time we tried to get him in the pool, he thought the water was too cold. Paul finally took him into the pool, but with all the fussing and crying, we decided it wasn't worth it. So Brady stayed around the side of the pool, taking every opportunity to push in his big brother.

Staying at the condo was, of course, the highlight of the entire beach trip. Everyone loved the convenience of being able to come and go to the beach or pool as often as we wanted. And you can be sure none of us wanted to leave! Now, more than ever, I want a beach condo when I grow up! 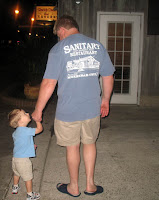 My favorite part of the beach trip was the hour we spent scooter-pootin' around Morehead City. I love that little town! It was fun looking at all the beach houses. We also drove to the house where my husband, Paul, lived when he was about three years old.

We went out on the town Tuesday night and had seafood at the waterfront Sanitary Restaurant in Atlantic Beach. We went to Sanitary last summer and decided to make a return trip. No one was disappointed. Yum! After buying a couple T-shirts, we went for a walk along the waterfront and let the kiddos run around.

On Wednesday, we took the kids on a tour to nearby Fort Macon. (You can watch a short news video about Fort Macon here.)

From the top of the fort, you can see the ocean. The view is absolutely beautiful! It's the best state park I've ever visited. You can take a tour of the fort and afterwards enjoy some time on the beach!

After leaving Fort Macon, we went back to the condo for some lunch. Later that afternoon, Paul's first-cousin, Susan, came for a visit. She lives in Raleigh and it was neat getting to meet her - she's a real sweetie. For dinner, we all went to Jordan's, in Emerald Isle. Though the restaurant is nothing particular to look at, the food is good. This was our second visit to Jordan's. The first time we ate there was a couple years ago, when we stayed at the beach condo around Christmas.

Thursday morning, we left the beach condo and headed to Greenville. We'd only been on the road for about 30 minutes when Paul got pulled over by a state trooper. He wasn't speeding so we figured the car must have a tail-light out or something.

To tell you I was angry is an understatement. I was boiling! When the trooper handed Paul the ticket and told him that the fine would be $100.00, I thought I would come unglued. Paul remained calm the entire time. He told the trooper he did not have any points on his license, had never been in a wreck and had never spent a night in jail. So why was the trooper ticketing one of the good guys?

I, however, was not calm. I was yelling at the trooper saying, "This isn't right! I can't believe you're doing this! Thanks a LOT!" I have never been angry with a policeman before in my life. I think the reason is because I have always deserved every ticket I've received. This incident just felt like pure harassment. It was a tough thing to get over (we're still irritated about it), but Paul now wears his seat belt in the law-abiding, uncomfortable way.

On the way back to Rocky Mount (my hubby's hometown), we made a stop at Greenville to have lunch at B's Barbecue. Unfortunately, they had run out of their famous barbecue, so we instead decided to get a cheese steak at Cubbie's. They've got the 'good ice', which is always a winner in my book!

After lunch, we stopped by the East Carolina University campus, my husband's alma mater. We went inside the college bookstore to browse around. While I was in line to pay for the T-shirts, Paul came up to me with Brady in tow, wearing an ECU 'adult-sized' football helmet!

You kind of need to know the background here. See, Brady LOVES football. He talks about football all the time, wants to 'play' football in the living room every chance he gets. Nine times out of ten, he would rather watch football movies (Rudy, Radio, Facing The Giants, and The Waterboy) than watch iCarly, Thomas the Train or Yo Gabba Gabba! And he's only two years old! Can you believe a 2-year old can be nuts about football? Well, he is!

Anyway, when I saw the helmet on his head, I looked at Paul and said, "Uh oh!" I told Paul I was planning on getting Brady a football helmet for Christmas. The adult-sized football helmet was so heavy on Brady's head, it made him topple over! So Paul and Brady went searching to see if they had any children football helmets. Well, thankfully, they found one! And Brady got an early Christmas present! He was so excited, as you can probably imagine. GO PIRATES! :)

Once we got back to Rocky Mount, we unpacked the car and hung out at Paul's mother's house, relaxing. Around 11 o'clock that evening, Paul and I slipped out to his Mom's restaurant, The Hunter Hill Cafe', to work on the menu in her office. It had been about a year since I had last worked on it, and her menu needed to be updated. If you happen to cruise through Rocky Mount, check out The Hunter Hill Cafe. She serves delicious food, cafeteria-style. Our favorite is their eastern North Carolina barbecue! Yum!

On Friday, our last full day in North Carolina, we hung out at the house and packed. We departed early Saturday morning, leaving the house at 7:00 a.m. and arrived at the Raleigh/Durham airport an hour later. Our departing flight was about an hour late, but since we had such a long lay-over in Dallas, it didn't matter. Once we arrived at the DFW airport, we had lunch and then took Dylan to his gate. He flew from Dallas to Houston to spend a week with his dad. Then Paul, Brady, and I found our gate and waited for the flight to Little Rock. We finally got home around 5:30 p.m. It was a long day and we were tired, but Paul and I both agreed it was much better than a 17-hour road trip!

On Sunday afternoon, Paul, Brady, and I took a four-hour nap! When I woke up, it felt like I'd been asleep about an hour. Hahahaha! I still can't believe it. Anyway, it feels good to be home. What did I miss most? My pillow - most definitely!

Monday morning, Paul, Brady, and I left the house at 5:15 a.m. to get Brady to Arkansas Children's Hospital for surgery. Brady was born with a small preauricular pit in his right ear. Brady was also born with a branchial cleft sinus (a small hole in his neck). Apparently, all these anomalies happened during the 5th week of gestation. 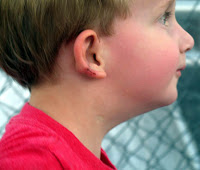 Brady had the branchial cleft sinus removed when he was four months old. Dr. Bower told us he didn't think the ear pit would need to be removed, but he would keep an eye on it. Well, the pit on Brady's right earlobe somehow got infected and after a doctor examination, we all agreed the pit should be removed.

The surgery went exceptionally well and now we're waiting for his little earlobe to heal. The doctor also put tubes in his ears to keep them free of any fluid.

Brady failed his next two hearing tests miserably (over a six month period). Both times, he had fluid in his ears, which didn't help matters. On one hearing test, Brady was sleepy, irritable, and uncooperative. The other test, we could tell Brady was distracted and not interested in cooperating. The doctor then surmised from the hearing test results that Brady probably needed hearing aids. Paul and I couldn't have disagreed more. We told the doctor we saw no evidence of a hearing loss. However, Dr. Bower told us parents are not good judges when it comes to their child's hearing.

When we told the doctor Brady's earlobe pit had gotten infected, he prescribed an antibiotic and scheduled the surgery. He told us he would also have an ABR done on Brady - which is a hearing test done only while a child is under anesthesia. This test takes behavior out of the equation. So Paul and I were excited that Brady was #1 - going to have the earlobe pit removed and #2 - Brady was going to have a hearing test that would accurately show us what he can or can't hear.

The good news is the ABR test results showed what Dr. Bower had originally told us... that Brady has 100% hearing in his right ear and a slight hearing loss in his left ear. Dr. Bower said at this time, he doesn't see a need for Brady to wear a hearing aid. Whew, what a relief! We knew Brady's hearing was good, but it was great to see the test results prove what we believed all along.

So, it's been a busy week and a half for us. How was your week?